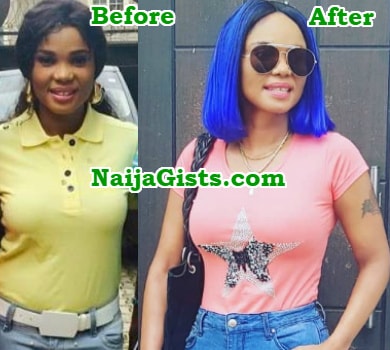 Nollywood actress Iyabo Ojo was in Istanbul Turkey in February for the birthday party of her colleague Fathia Balogun where she (Iyabo) did a dangerous surgery that almost ended her life.

Though it was earlier reported that she did Butt work, her friend said she did Belly Fat removal surgery, the same procedure Tonto Dikeh did to regain her self-confidence after birth.

The same friend who advised Iyabo Ojo to go for body enhancement surgery in Turkey last month has come to her defence.

The friend who refused to identify herself wrote a couple of media houses including Kemi Ashefon who broke the news of Iyabo’s Buttock surgery.

To set the record straight, the friend categorically said Iyabo Ojo did Abdominoplasty, the same surgery that ended the life of Stella Obasanjo in Marbella Spain on Sunday the 23rd of October 2005.

She added that the actress had a C Section scar in her abdomen and after talking to her, she advised her to consult a plastic surgeon who ended up removing the scar and excess fat in her abdomen.

The source confirmed that Iyabo Ojo didn’t wake up after the surgery until five days later.

This explains why the actress has been flaunting her thinner ab since she returned from Istanbul.

Meanwhile, a Nollywood source in Abeokuta NG called today to make some inquiries about Iyabo Ojo said surgery is not new to the actress.

The source categorically stated that Iyabo who did nose job back in 2010 did two surgeries days apart in Istanbul Turkey back in February of this year.

“My sister in Istanbul and all her friends even thought she’s dead because she did two surgeries (tummy work and bbl)  in one week. Have you hear that before even the doctor that did the procedures at her request should lose his license.  I will be In Istanbul on Monday for my sister’s naming. Will get you all the details next week.” – said the Ogun state-based Nollywood source

Two surgeries days apart? Isn’t that way too much? This explains why she passed out for 5 days.