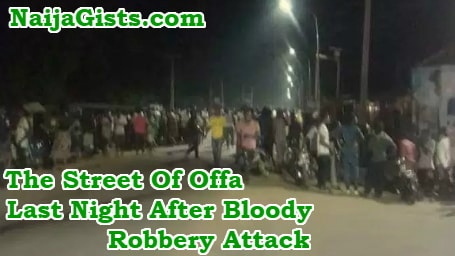 A pregnant policewoman, her colleagues and many civilians were gunned down yesterday when daredevil armed robbers stormed Offa in Kwara State. In all, about 17 people – policemen and civilians – were killed. The robbers raided five banks, Zenith Bank, GTB, First Bank, Union Bank and ECO Bank, in 70 minutes. According to witnesses, other victims in the evening attack included bank customers and market people.

The robbers reportedly made away with huge sums of money from the commercial banks they stormed. It was also learnt that the bandits, who operated for about an hour, entered the town about 4.45p.m. and operated till about 5.40p.m. They were said to have first blocked roads from both Ilorin and Osogbo ends to ensure uninterrupted operation. Thereafter, they headed for the divisional police station in the town, killing the policemen on duty, among other people at the station. They were alleged to have shot people in the head when they entered the commercial banks to rob.

The hoodlums, who escaped with unspecified amount of money carted from the commercial banks, also reportedly escaped through Igosun area of the town. Among the policemen killed by the armed robbers that operated in a commando style, was a man identified as Pelemo, who was expected to retire in a few months and a pregnant policewoman. Another witness said that bodies of six policemen were taken away in his presence, while efforts were being made to bring out others from inside the police station. It was also learnt that the bandits, who numbered at least 15, came in different vehicles as they stationed themselves at strategic areas of the town. They were also reported to have also snatched commercial motorcycles, which they used to operate and escape.

The General Hospital, Offa, where the injured victims were taken, was already over populated by those who sustained varying degrees of injuries and gunshot wounds. It was learnt that the management of the hospital has called for blood donation to cope with the huge number of those who required blood.

The state Police Public Relations Officer (PPRO), Ajayi Okasanmi, confirmed the incident, adding that victims included a policeman and other individuals. He said that details on the robbery would be made after a full investigation. A witness, Olusegun Ogungboye, said the robbers started operation about 4p.m. and drove away at 5.35p.m.

At press time, three died in Zenith Bank area (staff and police officer) but no casualty in GTB, First Bank and Union Bank, while two died at ECO Bank area. Also, a body of civilian was in front of Post Office while another was in front of Roman Catholic Church. Also discovered were about 10 bodies in various offices within Owode Police Station (civilians and police officers).