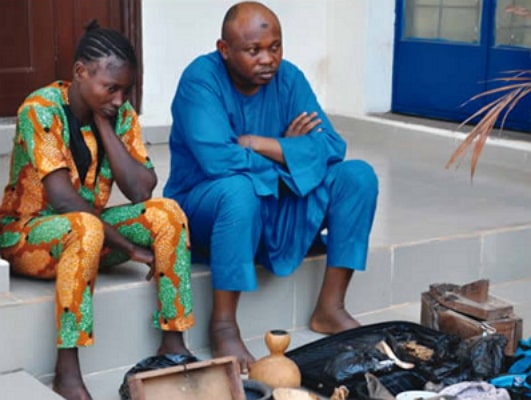 Update on the story of the cleric arrested in Kwara state on Thursday over a missing placenta case.

A middle-aged Islamic cleric and graduate of Al-Ikmah University, Ilorin, Kwara State on Thursday confessed that he bought a human placenta which he intended to use for ‘iyonu aye’, a spiritual appeasement to be favoured. The development came as authorities of the General Hospital, Ilorin set up a panel to investigate how a pregnant woman who had complications in the process of delivery was referred to a private clinic instead of the University of Ilorin Teaching Hospital (UITH) which is equipped to handle such cases.

The alfa, Salahudeen Ibrahim, who said he graduated from Al- Ikmah in 2016, told journalists shortly after he was paraded by the police at the command‘s headquarters that he inherited the power but had vowed not to use it again. Items recovered from the cleric and displayed yesterday included a miniature coffin, charms and an exercise book/photocopy sheet for charm. Ibrahim was paraded alongside a mother of three, Fatima Suleiman, who allegedly sold the placenta to him from the private hospital where she worked as a nurse. But while Suleiman denied selling the placenta, claiming that she only assisted Ibrahim who she claimed was the husband of her close friend, the cleric claimed that he was contracted by the nurse for the purpose of procuring ‘iyonu’.

“She came to me that she heard people say that one can use placenta to do ‘iyonu’ and I said yes and that was the end of our discussion until she came to me some months later that she had not forgot the issue. She then brought the placenta on Thursday but I told myself that even though I inherited this thing I don’t want to do it, I don’t want to use it.

So I called her to come and pick it but she refused until later when she called me to say that the matter had become a problem and I had to find a means of disposing the placenta to save myself from trouble.”

But Fatima Suleiman said the cleric was not telling the truth. The nurse, who challenged her co-suspect to swear by the Holy Quran, claimed that it was the cleric who approached her being a close friend of his wife and asked her to procure the placenta for him. She said it was her first effort in the trade and that she had not demanded any amount from the cleric or was she promised any reward for procuring the placenta.

The Commissioner of Police, Mr. Bolaji Fafowora, who paraded the suspects, recalled that a pregnant woman, Mrs. Bashirat Jimoh, wife of Mr. AbdulFatai Jimoh of Gaa-Akanbi area of Ilorin, was due for delivery but had complications and was referred to Capstone Hospital, Taiwo Road, from the General Hospital for a caesarean section.

“Upon a successful surgery by Dr. Mohammed Jamiu Mohammed on the same date, the doctor handed over the placenta of the new born baby to his hospital attendant, Fatima Suleiman, to give same to Jimoh the biological father of the new baby but instead, the suspect delivered the placenta to Alfa Salahudeen Ibrahim to use for charm with the hope of getting monetary reward from him.”

Meanwhile, the panel set-up by the management of the General Hospital, Ilorin, has begun work to identify who authorised the removal of the pregnant woman from the facility to a private hospital. Unofficial sources claimed that the referral was actually done by a nurse, a development that may put more leaders of the hospital on the spot.