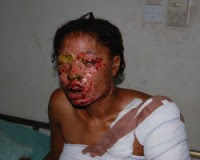 A jealous man is cooling off in Police detention following an acid attack episode on his ex-girlfriend.

The man whose identity is still unknown allegedly poured acid on his former girlfriend on a date he forcefully requested for a talk after weeks of relationship break.

According to the victim named Blessing, she told the man in question she was no longer interested in dating him due to irreconciliable differences. The message didn’t go well with him.

On the fateful day of the acid attack, the jilted man visited his victim’s house where he met her with a new man she’s dating.

He poured a concentrated Hydrochloric acid on her face which resulted in vision loss.

She was admitted at the UBTH where doctors believed she needs to visit a specialist hospital in India in order to get her sight restored.

This is serious… Wishing Blessing a quick recovery.