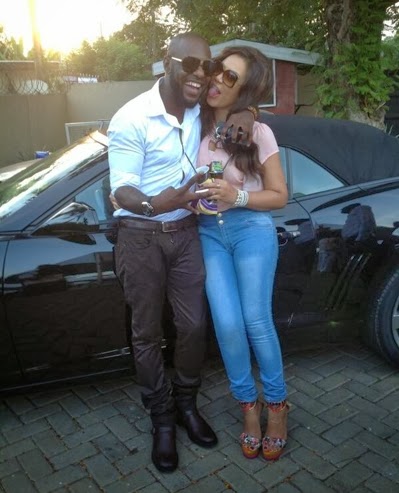 Believe it or not, the relationship between Nollywood actor Jim Iyke and his best friend, Nadia Buari has hit another road block.

According to sources, the one time forever lovers are facing serious issues in their relationship as we speak.

Though the real gist is not yet available but according to rumours, Jim Iyke was recently spotted at TB Joshua’s church for counseling days after Nadia Buari’s mother paid a visit to TB Joshua complaining about her daughter’s crumbling relationship with the actor.

But contrary to everything going on, the actor still calls Nadia his best friend.

On Friday, Jim Iyke took to Twitter to share a lovely photo of himself cuddling Nadia Buari with the caption:

“At d studio wif #BFF 4 d final cut of #DiaryOfImogenBrown.#EaglePersonality. U fly where they ct reach”

But Nadia appeared a bit stiff unlike her usual self.

A quick check on Nadia Buari’s Twitter profile revealed nothing of such, all Jim Iyke’s pictures on her profile have been removed and for the past one month, she is yet to mention anything about him.

Although their recent appearance together might have put an end to speculations in the press that the two are no longer together, the fact remains that the duo are having serious problems in their relationship.

Jim Iyke dated a Jamaican model, Keturah Hamilton for years before dumping her for Nadia Buari this year. Few weeks ago, a lady named Nancy Alofinaka came forward that Jim Iyke impregnated her.. If you missed the story, read it here.

Another source from Ghana said when the story first broke, Nadia Buari’s mother went to pray about it and it came out positive.

Could this be the cause of the heart break?