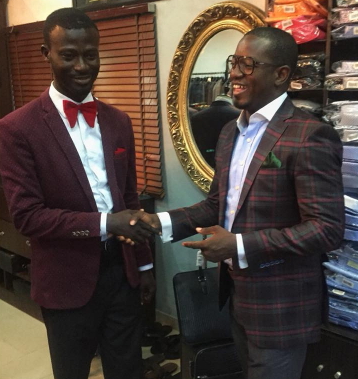 The unemployed man spotted cleaning windscreen in Abeokuta and Lagos few weeks ago has cut off all communications with his sponsor.

His sponsor, Uche Nnaji offered to teach him tailoring and use him at his shop in exchange for sponsorship of his education at the National Open University of Nigeria but sadly, he has turned down the offer.

“Sometime last month I saw an online image of a well-dressed young man cleaning windshields in traffic. I was touched by this, and then I felt the urge to ASSIST, with the HOPE that I can positively IMPACT him in my own little way . . We met and discussed on way forward. During our discussion I observed his SKILL was limited to SqueeGee. This gave me great concern, as it may not offer him anything above the JOB of an Office Assistant, then I felt it won’t be the best for him. . .

We (The photographer Daniel Sync and myself) talked with him and also decided he must go get his transcript from UniIlorin so we can eventually get him into the Open University in Lagos to enable him complete his education while Getting TRAINED with me. .

We were all excited as he walked into my office just last Monday (5days ago) with the ADMISSION forms from the OPEN UNIVERSITY. That same Monday the official TRAINING began with him in my Lekki office.

The week ahead I had started by giving his Wardrobe Sartorial Healing for a Change and I made sure NO PICTURES were taken while giving him these items of clothing ( the Red polo he was wearing in the video I posted 3 days ago of him working with me last Friday and the white shirt he chose to wear back to the traffic yesterday all came from my PERSONAL collection) As I felt that wasn’t necessary since my concern was to start a paradigm shift for this young man who needs to see the better side of life. .

But I guess, people always want what they want. During our class session on same day (Monday) it dawned on me that he was unable to GRASP what He was being taught. But I still didn’t give up on him, hoping that time will make things right for necessary adjustment.

The aim was to TEACH him how to FISH by EMPOWERING him with necessary skill from some industry fashion professionals which certainly comes with more benefits after wards. After his class on Monday where we reached an agreement that he would LEARN various skills including tailoring, Abdulai went off the radar only to be sighted yesterday cleaning.”

May be tailoring is not his thing. Perhaps Mr Nnaji can help him out without using him as an apprentice to enrich himself.