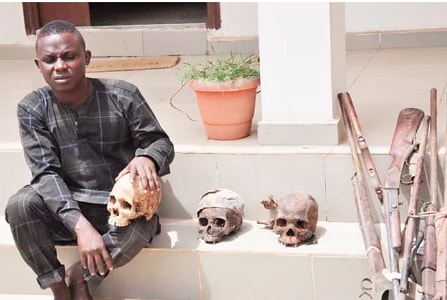 A tailor who also works with the Lagos Waste Management Authority LAWMA has been arrested in Ilorin after 3 human skulls were found in his possession.

The suspect 32-year-old Ajenifuja Suleiman was arrested on Monday the 26th of March 2018 when police did a stop and search operation on a commercial bus from Lagos to Ilorin.

3 human skulls were found in a sack owned  by the father of two.

In his confession, he said he found the human heads while sweeping the streets of Lagos.

He added that he wanted to drop the skulls when someone advised him to visit an Alfa in Ilorin.

When asked what he wanted to use the skulls for, Ajenifuja said he only wants to use the human skulls to do charm that will bring more people to his shop.