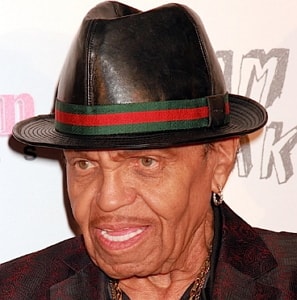 Her father, Joe Jackson lost his long time battle with cancer at his family home in LA  today.

According to family sources, Joe died exactly 2 days after the 9th rememberance anniversary of his son, late Michael Jackson.

A source close to the Johnson family told Radar Online today that Joe’s health took a worst turn today and died before they could rush him to the hospital.

The deceased who moved to California in 1968 helped his sons put together  The Jackson 5 group and supervised the group before taking a break from music.

Joe who gave  up the ghost at the age of 89 today is survived by many children, grand children and great grand kids.