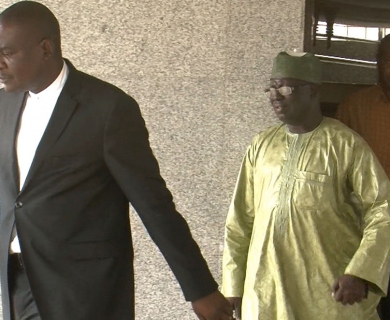 Nigeria’s Economic and Financial Crimes Commission has re-arrested John Yakubu Yusuf, a former director in the Police Pension Office who was given a-slap-on-the-wrist punishment yesterday by a Federal High Court, after admitting stealing, along with others, N27.2 billion from the police pension fund.

Justice Mohammed Talba at the Federal High Court in Abuja handed down to Yusuf, a two-year jail term or N750,000 fine to the disgust of many Nigerians.

Wilson Uwuajaren, spokesperson for Economic and Financial Crimes Commission, EFCC confirmed to P.M. NEWS on Tuesday that Yusuf who was chauffeur driven away in a Mercedes Benz car immediately the judgement was delivered after paying the fine was re-arrested Monday night.

He however did not specify when the accused will be re-arraigned in court or the fresh charges that will be slammed against him.

The EFCC spokesperson told P.M. NEWS that the papers for the re-arraignment of Yusuf are still being perfected.

Justice Talba provoked nationwide outrage yesterday after he asked Yusuf to forfeit forfeit 32 houses in the FCT and Gombe as well as N325m EFCC said was in his account.

A cross-section of Nigerians described the sentence as an indication of lack of enthusiasm to fight corruption by government and the judiciary.

The EFCC also condemned the judgment in a statement issued on Monday night while promising that it would come out with appropriate response.

“The EFCC has expressed reservation about the ruling of an FCT High Court, Abuja which handed a six-year-jail term with the option of N750, 000 fine to John Yakubu Yusufu, one of the persons standing trial in the N32.8bn Police Pension scam.

“Justice Mohammed Talba convicted and sentenced Yusufu to two years’ imprisonment with the option of N250, 000 fine on three of an amended 20-count.

“The commission is of the view that the option of fine runs contrary to the understanding between the prosecution and the defence wherein the convict consented to a custodial sentence with the forfeiture of all assets and money that are proceeds of the crime,” the anti graft agency said in a statement signed by Uwujaren.

Reacting to the judgment, Constitutional lawyer, Prof. Itse Sagay described it as outrageous because of the victims of Yusuf’s theft who are all old men who had served the country meritoriously.

“This is what these old men get in return for serving the country, for somebody to just come and sweep their money off. If you say a pensioner should get N1 million pension monthly, which is not possible, it means that Yusuf has stolen the pension of 32,000 pensioners. We should change our laws to accommodate death penalty for anybody who steals pension fund,” he stated.

Comrade Debo Adeniran, founder, Coalition Against Corrupt Leaders, CACOL, denounced the judgment, saying that “is the way the Nigerian government shields corrupt elements in the society. The system does not put machinery in place to punish corrupt people.

“The government too is guilty of the offence of corruption. The judgment is a slap in the face of Nigerians. There is evidence the man knew what the outcome of the judgment will be, which was why he brought N750,000 cash to the court.

“He has just been given clean bill of health to enjoy his loot. It is a bad example to the youths of Nigeria. What has happened is not justice,” he added.

Spokesman, Save Nigeria Group, Yinka Odumakin was very angry over the judgment, saying that the judgment “is an induction ceremony for another criminal in Nigeria. It is only petty crooks that get punished in this country while the big crooks go scot free.

“Nigeria is a republic of maggots. The judgment is a confirmation that crime is a big problem in Nigeria. Until there is a drastic action, in this country, all these anti-crime bodies being set up are useless,” he stated.

Activist, Bamide Aturu was extremely disappointed with the judgment, saying the judgment “is horrible and shows the kind of country we live in. It shows Nigeria is now the headquarters of corruption in the universe.

According to Aturu, this kind of judgment would certainly encourage more people to steal as it now pays to be a criminal in Nigeria, adding that “there should be a protest by the people over this issue and I don’t mind to join them. If something urgent is not done to fight corruption in Nigeria, there will be a serious problem.”

Lagos lawyer, Festus Keyamo said the judgment was an aberration. “It is a travesty of justice and a complete abuse of the plea bargaining procedure. This is the reason why people oppose plea bargaining.”

In his reaction, a Lagos lawyer, Chief Benson Ndakara said, “this is bizarre. From the report, it is clear that there was a plea bargaining and in any official plea bargaining, the agreement must be adhered to.
“For the EFCC to have consented to such an agreement is worrisome”

Another lawyer, Barrister Alex Uzebu said the judiciary has missed it, stressing “it is not a surprise because a similar judgment had been delivered in the past.

He cited the cases of former Edo State Governor, Lucky Igbinedion, Cecelia Ibru and former Bayelsa State Governor, Diepreye Alamieyeseigha. With what is playing out in our judicial system, there is no way corruption can be reduced.

“For example, in the case of Madock in the USA, he was not given bail. As I speak to you, he is in jail. He was sentenced to life imprisonment for corruption. The law of punitive correction is strictly applied in democratic society.

Why is it that Nigeria’s case is different?

“In Nigeria today, civil servants or public office holders are richer than businessmen. They own estates, yatch and other luxurious things of life. These are the things wrecking the economy. The way we run our capitalist economy is a painful scenario.

“There was so much noise about fuel subsidy scam but the whole thing has died down. The civil servants who assisted the oil marketers to defraud the country are still in their positions. The whole system is a network of fraud. Until President Jonathan retraces his step back to Nuhu Ribadu days of anti-corruption war, Nigeria is finished.”

Another lawyer, Mr. Bayo Onifade said: “It is not too good when people stealing that amount of money are not given higher sentence or stiffer punishment. It is a bad signal to the battle against corruption, as this punishment cannot serve as a deterrent to others who engage in similar adventure.”

Editor of Gani Fawehinmi Law publication, Oluwole Kehinde opined: “Honestly speaking, to serve as a deterrent to others, the punishment is too lenient. In most cases, the judge has the discretion to allow the culprit to go to prison, especially when some people are asking for death penalty for corruption related offences. It is not good to blame the judge because in a plea bargaining, we don’t know what must have informed the decision.”

Barrister Sipo Osewa said, “With this type of punishment, there is no way corruption can be reduced. Nigeria will soon become a laughing stock among the league of nations. There is need for our lawmakers to amend the laws that will provide for stiffer penalty for this type of offence, for Nigeria to move forward. Now, is the time for our lawmakers to wake up to their responsibilities.”

In his reaction, the chairman, Nigerian Bar Association, NBA, Lagos branch, Mr. Taiwo Taiwo said: “I think the law is the problem because once the law stipulates certain penalties for certain offences, the judge cannot do otherwise. Though the punishment seems to be a slap on the wrist, the man has been convicted already, forfeited some of the properties suspected to be proceeds of the crime but if we are serious about fighting corruption, the law must be amended.”

The former secretary-general of NBA, Lagos branch, Mr. Ike Uko said, “Though the punishment seems to be light, the loot has been recovered. The man is now an ex-convict. He has suffered some legal disabilities. He has been dismissed, no pension. He cannot contest an election for the next 10 years”