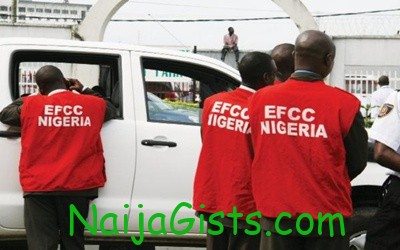 A member of the Pension Task Force told one of our correspondents that the Permanent Secretary’s office was searched and some incriminating documents were found.

The source said, “His office was searched and some documents were found including a fixed deposit of N1bn.”

Spokesman for the EFCC, Mr. Wilson Uwujaren, confirmed on the telephone, that a Permanent Secretary and seven directors were arrested over the pensions scam. But he added that they had been given administrative bail.

He, however, refused to disclose the ministry and identity of the Permanent Secretary, saying that “investigations were still ongoing.”

Uwujaren said, “What I can tell you is that we arrested a Permanent Secretary in respect of the ongoing investigations into pensions administration – a permanent secretary and about seven directors.”

A member of the Pensions Reforms Task Team said the development was a fresh discovery.

“Some of the exhibits contained documents containing issues that were raised against (Abdulrasheed) Maina, including the one written by Borno Youths and other falsified documents that were filed against us,” said the Task Force member.

Further, he said the EFCC and the Independent Corrupt Practices and Other Related Offences Commission, all members of the PRTT, were continuing their investigations into the matter.

The Senate Joint Committee on the Investigation into the Administration of the Pensions Scheme, during its one week public hearing, was told of how officials of government falsified documents to siphon pensioners’ money.

The PRTT particularly revealed how a whopping N151.6bn and £6m were recovered after the conduct of biometric data capture exercise on pensioners since 2010.

Chairman of the team, Abdulrasheed Maina, had informed the committee that whereas N5bn was paid to the Office of the Head of Service monthly for the payment of pensions, only N1.9bn was actually required.

It was also discovered that hitherto, 141, 790 pensioners were listed on the government’s payroll, even though only 70,657 were genuine pensioners.

Maina had also told the committee that the Police Pensions Office collected a monthly N5bn as claims for its pensioners, while it actually needed N500m.

He had explained, “We discovered illegal withdrawals by staff of the Police Pension Office using multiple cheques in fictitious names in excess of 30 cheques per day to withdraw cash from their bankers.

“Such illegal withdrawals amounted to N14bn. The PRTT, assisted by the law enforcement agencies, have made substantial recovery of the said stolen monies.

“A staff of the Police Pension Office (names withheld) turned in N1bn cash. Another surrendered three luxury estates with about 27 blocks of deluxe flats he built in Abuja,” Maina had told the committee.

The Minister of Finance, Dr. Ngozi Okonjo-Iweala, had confirmed the fraud discovery by the Maina-led task force on pensions.

However, Maina and his team were also accused of sharp practices by the Assistant Chief Accountant in the Police Pensions Office, Mr. Toyin Ishola.

But Maina had denied the allegations, saying Ishola presented forged documents to the Senate panel, upon which he based his assumptions(credit: punchng).