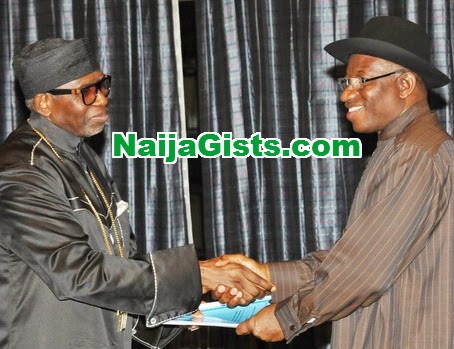 Few weeks ago, Governor Rotimi Amaechi exposed the corruption in the body of Christ in Nigeria but a Pastor in Borno said Amaechi got it wrong that the amount paid by Jonathan was 7 billion naira.

The executives of The Christian Association of Nigeria headed by controversial Word Of Life founder Ayo Oritsejafor is under fire for allegedly collecting bribe to ensure his best friend, President Goodluck Jonathan is re-elected.

A Borno state based Pastor identified as Kallamu Musa-Dikwa exposed the corruption today while talking to journalists.

Musa Dikwa, the Director of the Voice of Northern Christian Movement told reporters on Thursday in Kaduna that the money, (N7Billion)  was paid to the Christian Association of Nigeria on the 26th of January 2015 and N3million was disbursed to each State Chairman of the body across the country..

Musa-Dikwa, an Associate Pastor with the E. Y. N. Church, Farm Centre, Dikwa Road, Maiduguri, Borno State, under Rev. Emmanuel Kwajihe between 2002 and 2004, said the CAN had started threatening Christians leaders in Borno that they must re-elect Jonathan in the rescheduled election or face sanction.

“It was N7bn that was given to the CAN leadership by President Goodluck Jonathan. They(CAN) later disbursed N3m to the State Chairmen of the CAN.

“Actually, President Jonathan is using CAN President, and it was the CAN President who collected the monies and shared N3m to the CAN executives in each state.

“And some Pentecostal Bishops also collected their share. Actually, the money is not N6bn, it is N7bn. This is what I know. One of the CAN officials from Abuja told me that they have collected the money. The corruption in CAN is terrible. They are corrupting the body of Christ because of money.

“They are now threatening Christians in Borno State that they will deal with anybody, who refuses to vote for Jonathan. And the CAN officials are now campaigning that if Buhari emerges President, he will Islamise Nigeria; and that Osinbajo collected monies from Islamic world; and that the same Osinbajo will resign soon after Buhari wins to give way for Tinubu to emerge Vice President.”

He mentioned names of popular clerics who got their own N3million in a bid to ensure Jonathan is re-elected.

This thing has been going on for a while and Oritsejafor is yet to debunk it meaning the money was paid to him.

Now this is serious…. Whoever is behind the distribution of the bribe will soon face the judgement of The Most High.

You can’t corrupt the body of Christ and go scot-free.