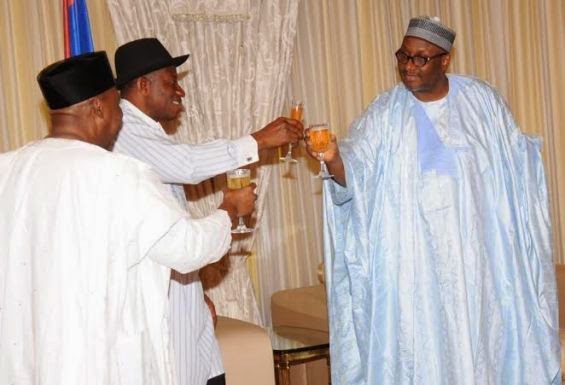 President Goodluck Jonathan and Vice President Namadi Sambo will spend over N4billion on food and travels in 2015, according to the details of the budget proposal submitted to the National Assembly by Finance Minister Ngozi Okonjo Iweala.

The presidency has a total budgetary allocation of N26.6 billion (N12.9 billion for personnel, N11. 1 billion for overhead and N2.5 billion capital development fund) next year, subject to upward or downward review by the lawmakers.

Also according to the proposal obtained by Daily Trust in Abuja, both the president and his deputy have been allocated a combined sum of N1.2 billion to be spent on food stuffs and kitchen items.
Another sum of N310 million will go for purchase of drugs and other medical and laboratory equipment.
Other expenses include the sum of N13.5 million on the feeding of wild life at the State House zoo.

The presidential air fleet has a total budget allocation of N5.3 billion with only N36.1 million as salaries while the remaining sums will be spent on overheads and capital expenditure.
The office of the National Security Adviser (NSA) was allocated the sum of N84.1 billion out of which N20 billion is for capital expenditure, N64.1 billion for recurrent. Of the N64.1 billion only a party sum of N268.4 million is for salaries.

According to the NSA’s budget details, N1.3 billion is to be spent on security services, N15 million on fueling of generators, N20.8 million on food, and N11.1 million on local travel.
Daily Trust reports that the Federal Government had, due to dwindling prices of oil, proposed a budget of N4.3trillion. Capital expenditure was cut to N633.53 billion as against N1.552 trillion in 2014, but recurrent expenditure was raised to N2.616 trillion as against N2.468 trillion in 2014.

Already, the crude oil bench mark price has been reviewed thrice and is now pegged at $65 per barrel, which is still above the $60 price of oil in the international market.