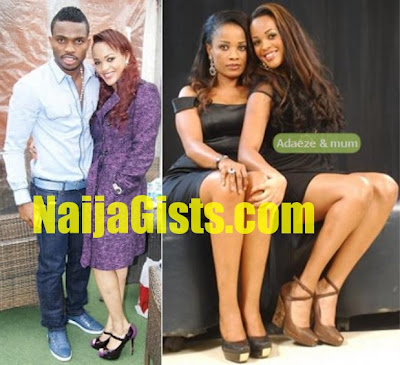 July 20, 2013 – Joseph Yobo Banned Wife’s Mum From Their House In Turkey “Adaeze Igwe’s Mother Is A Bad Influence On Her”

According to the National Enquirer, the winner of MBGN contest in 2008, Adaeze Igwe who married Joseph Yobo, Super Eagles captain are having a difficult time in their marriage.

3 months after meeting each other in Dec 09, the lovebirds tied the knot in a rush. Joseph & Adaeze are patching their broken relationship as we speak.

The problem in their marriage started when Adaeze’s mother, Mrs Abigail Fashanu came into their home.

We learnt Joseph Yobo and his wife’s mother got into a clash after he learnt she planned to crash their marriage.

It was reliably revealed that the woman who’s married to her third husband with Adaeze and her younger sister from different men, allegedly controls the marriage to the extent of advising her daughter against getting pregnant for Yobo even after Joey, their son is almost three.

The reason she gave her daughter, we further learnt is because she needed to get back into her sexy shape just in case things no longer work out between her and her Plateau born hubby and might require her re-marrying.

She was also alleged to have instigated Adaeze’s hush return to school barely a year after her marriage as the ex-model is presently furthering her studies in far away Santa Monica College, Los Angeles, USA, where she is reading Communication while her husband and son are in Turkey.

The goal hunter who used to play for Everton of England before making a switch to Turkish side Fernabarche also allegedly found out that Mrs. Fashanu could have a hand in Adaeze’s frequent request of money for irrelevant things as she’s said to have developed an unexplainable interest for frequent shopping.

The fight started When Joseph Yobo’s mother formed the habit of persistent visit to their home in Turkey unannounced to interfere in every minor argument between the couple.

As a result of this, Joseph Yobo placed a ban on her to stop visiting their home as her interference is hurting their marriage.

We learnt Adaeze’s mother was not invited to Joey’s second birthday party.

Insiders revealed that the Super Eagles captain has advised his wife to choose between her mother and her husband.

For now, she has been banned from visiting their home.

This is serious. I suspect the light-skinned madam is trying to eye Joseph Yobo.