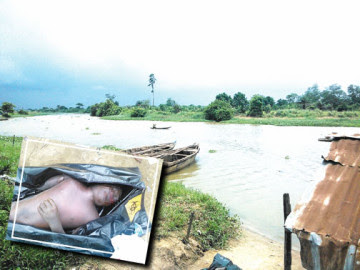 Tears flowed freely at WayBridge River, Owode-Onirin, Lagos on Wednesday as the family of a 14-year-old JSS II pupil of Ikosi High School, Ketu, Lagos, Feyipitan Owonifaari, prepared to bury his remains by the riverside.

Feyipitan drowned in the river on Tuesday morning, while swimming with his brother, Farouk.

His body was retrieved from the river by officials of Merchant Navy attached to Lagos State Emergency Agency on Wednesday morning.
Our correspondent, who visited the site of the incident, saw Owonifaari’s body was in a bag by the banks of the river as his family was preparing to bury him.

He explained that Feyipitan went to swim with Farouk, 11, and a neighbour, Muis Ajisafe, 12.

Ajisafe told PUNCH Metro that he did not know the reason for the incident.

He said, “We were swimming at a distance away from him. Suddenly we heard him shouting for help. When we looked back, it was only his hands that we saw above the water as it carried him away.”

Farouk, who was weeping profusely, said, “I swam immediately to him and tried to pull him out, but he was too heavy. I had to let him go.”

He added that while he and Ajisafe were good swimmers. Feyipitan was just learning to swim.

Owonifaari’s father, Ade, a teacher, said, “I was on Lagos Island yesterday (Tuesday) at around midday when his mother called me and told me that Feyipitan went to swim and could not be found.

“I hurried back home and went to the riverside, but I could not find him. This morning, some government agencies recovered his body. He was a gentle boy, it baffled me that he would have gone to the river to swim.”

His mother, Omolara, an employee of the state Neighbourhood Watch, said, “I was washing clothes at around 11am when his brother, Farouk, came running and told me that Feyipitan had been carried away by the river. I had warned Feyipitan and his brother earlier to stop swimming in the river, but they did not listen. I had three children; Feyipitan was my second child. ”

One of the rescuers, Martins Akinnubi, said children in the community were in the habit of swimming across the river to pluck mangoes at the other side.

“Perhaps, that was what Feyipitan and his brother were trying to do when he was swept away by the river,” he said.

The General Manager of LASEMA, Dr. Femi Oke-Osayintolu, who confirmed the incident, said the victim’s body had been handed over to his family.