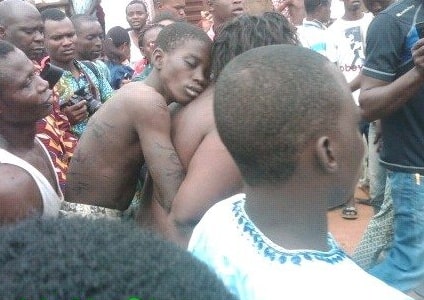 Police in Akure, the capital city of Ondo state have arrested a woman, Ajoke Adebayo, for allegedly beating her 14-year-old son, Matthew, to death. Also arrested was a police officer, Idowu Adebayo, who was invited by the woman to assist her in beating her son.

Adebayo was said to be the brother-in-law of the suspect and he allegedly contributed to the death of the deceased by beating him along with his biological mother.

It was reported that the deceased, who was a JSS 3 student, was tortured to death by the suspects for stealing N21,000 from the bank account of his mother.

A source said ,after she discovered that her son had stolen money from her bank account, Ajoke called her husband, Ayodele Adebayo, a police officer, to inform him about the misdeed of his son.

Adebayo was alleged to have ordered his brother, Idowu, also a police officer, to discipline the deceased.

“When they eventually opened the door of the room where he was locked in, he was unconscious and they rushed to the hospital, where he gave up the ghost.”

The police public relations officer in the state, Mr. Femi Joseph, who confirmed the incident, said investigations have commenced and efforts are on to arrest other accomplices in the matter.

“We have arrested the two suspects and, very soon, we will arrest the father of the deceased who is a police officer that gave the order to beat the boy. He is not serving in our command here but he will soon be arrested.”