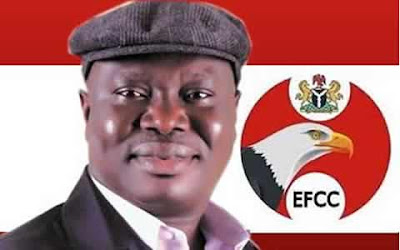 The re-arraignment was sequel to the retirement of the former judge, Justice Okechukwu Okeke, who was presiding over the case.

In lieu of the retirement of the judge, the case was re-assigned to Justice Ibrahim Buba.

In the new charge, the accused speaker and his personnal assistant were alleged to have transacted business to the tune of N518 million without going through any financial institution between 2010 and 2011, and thereby committed an offence contrary to Money Laundering Act.

The Speaker and his aide pleaded not guilty to all the charges.

Their lawyer, Mr. Tayo Oyetibo, SAN, leading two other senior lawyers, Tunde Akinrinmisi and Abiodun Onidare, told the court that they were cautious not to file application for bail because the accused persons were already on bail.

But the presiding judge, Justice Buba, said that he is not bound to the previous bail and therefore asked Oyetibo to move an application for bail.

Oyetibo said the speaker was on bail on self recognition, while the Clerk of Lagos State House of Assembly stood as surety for the second accused person.

In his reaction, Chief Obla said he is not opposing the bail application, but that what he is after is that the trial of the case should continue, therefore, leaving the issue of the bail to the discretion of the court.

In his ruling for the application for bail, Justice Buba granted them bail in the sum of N5 billion with two sureties in like sum.

The two sureties must file affidavit of means while the accused must sign an undertaking of coming to court regularly.

The bail condition must be perfected before 48 hours and the two accused will not be remanded in prison custody.

However, failure to perfect bail conditions before 48 hours will attract a bench warrant being issued against them.

However, Onidare and Akinrinmisi urged the court to vary the bail conditions.

In acceding to their request, Justice Buba reduced the bail from N5 billion to N1 billion.

Thereafter, the case was adjourned till 25 September for trial to commence.

Clarion Chukwura: “I Got Pregnant As A University Undergraduate At Age 17”
Alleged Husband-Snatcher, Stella Damasus Denies Pregnancy, Quote Bible Verse To Defend Self