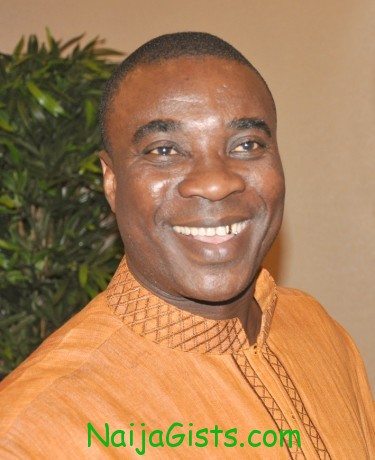 Top Fuji musician K1 the Ultimate, KWAM 1 will spend all of 2012 blessing God and thanking fans, as he takes stock of an enduring career that has lasted for decades. naijagists.com

The Fuji godfather and veteran bandleader sat down with NET on Saturday January 7, 2012, to talk about the secret of his longevity, the many hurdles and stepping stones, and what tomorrow holds. Not at all looking his age, the 54 year-old performer ran up the stairs as he led us to his suite. When he opened his mouth to speak, he commanded the English Language like a maestro – quite fascinating, for someone originally with limited formal education.

Apparently, self-development has been the lucky charm of the Fuji giant, who started out as a ‘packer’ with the late Fuji founder Sikiru Ayinde Barrister. While working over the years to redefine his music and his brand, KWAM 1 obviously understood the importance of education and the English language for someone who fancies global attention – and he’s spun the language, more than anyone in his genre. At home with issues across all sectors and continents, and extremely eloquent, the Fuji leader understands the importance of staying ahead, if he’s to lead his followers right.

After this interview, he’s off to a performance in Lagos. The band is busy every week, honouring engagements all over the country. This has been K1’s lifestyle for as long as he can remember. And even though he’s been in this game for four decades and counting, he tells us he’s not about to slow down; not to talk of retiring.

It’s surprising that you are marking 40 years in music, especially since you aren’t 60 yet. Your first major album Talazo was released in the mid ’80s, so how come you are celebrating 40 years today?

Not mid 80’s but in the early ’80s. My first album was in ’79 and by the count till today, that’s over thirty years. It wasn’t the first day that I started doing music that I made my first album. Before Talazo in ’84, I had about three series of Talazo. Talazo was a series I started 1980. Before Tala ’84 and the Talazo series, I had released my first album in ’79 titled Iba, that was when I went on my first pilgrimage. All albums till date have been released under Omo Aje Records.

Many artistes have come and gone, but like King Sunny Ade, you seem to be one of the few that have been consistent over the decades. What’s your secret?

The secret is that it has been the grace of God, there can’t be any other secret. You know you are there doing something continuously, you should know it’s the grace of God; there’s nothing more extraordinary about you than another being. When the history of music is being talked about in America, the Jackson Five comes to mind. The foundation of the Jackson five, to what Michael Jackson later became to America and the rest of the world. So that also is the case with K1 the Ultimate Wasiu, all in the mid 70’s to 80’s up till today.

You kept rebranding, from Wasiu Ayinde Marshal to KWAM 1, to K1 the Ultimate; why so many changes, and has it worked for, or against you?

It’s a very good thing with a lot of good favours. The advantages are very high. Rebranding is very good to a product. A good product truly needs some touches. You don’t leave a stone unturned. You keep on turning and turning to discover good sides to it. It is showbiz, show and business; the two interwoven, so that’s what we are doing and that’s one factor that has kept us going over the years.

You have been described as the man who revolutionized Fuji Music, the man who introduced a lot of Western instruments into the  genre without compromising the quality of the music. What would you say is your most important contribution to Fuji music?

I have three major contributions to Fuji music. One: my utmost belief when I started was that Fuji music must be lifted up to another level which is what I did. It became something so fascinating to the youths of then and I was able to carry them along. We all grew together and every youth that has come right after us has followed the same trend and that’s why we were able to enjoy the followership among the young ones till date. When I started, I lifted it up from where I met it. I created the first upbeat tempo of Fuji music and was able to give it a kind of followership that most music forms didn’t have. We were born to see music as being enjoyed by our fathers as serious, including the disco of then. The younger ones did not really have a style they could call their own. The elder ones discouraged us and were always like ‘you want to listen to music? Go and face your studies’. Two: I kept that trend, doing something at first is no problem, but sustaining it is difficult. So I was able to sustain it whereby everybody coming after me, they joined the trend, you know, like Ayuba came in and the rest. So it was the trend I set that I maintained by the grace of almighty God, now everybody is joining in. The third one is that I was able to infuse a lot of instrumentation and package it in such a way that I did not lose touch with the originality of the music. These are the three major things that gladden my heart and I thank God for giving me the grace to do that.

What have been your most difficult challenges?

Truly there must be challenging situations but those ones that are of note is the fact that I’m at the middle, I had the likes of Barrister and Kollington, who are much older than me as my senior, and I have those younger ones, so you can imagine the pressure. So when I want to step up those ones ahead of me will be slowing me down and those ones below… they see me as a role model because I am the man that created a path for them, I am their pathfinder and they are really finding everything easy so anything they want to do with Fuji music, they find the terrain very conducive for them and very free because someone has done it for them, so I’m in the middle and you can imagine the pressure on me from the back and from the front. Also, not having the government to help the industry is a challenge to me.

Why have you never really favoured music videos?

Let me first of all answer this question by correcting the assumption that we don’t want to do videos. Huge investments are paid in music entertainment but there are no governmental concerns into the area of securing those investments. You can then imagine pirates enjoying 95 per cent profit of the job. The spirit is not there, when somebody puts in that money, a marketer puts that money to produce, you too you put effort down to get a job done, you are not even in the spot of getting 2% of the money before somebody who did nothing makes about 70% just at a go. The investor, producer and the artist are unable to believe the fact that they made just about five per cent. So the success of the whole thing lies in the hand of somebody who has no investment at all. The musical video is only for promotion on the TV. Promoting who? Promoting who has 95 per cent of the profit or still promoting the three or five per cent which will be shared between the investors and I? So I’m not thrilled. It is the number one point that kills music globally. But among us we left many things unattended to which killed a lot of things in totality here.

How are you celebrating your 40th year on stage? Are there any concrete plans yet?

Number one is that I had always wanted God to lead me to this point so starting from now, there’s going to be a lot of programmes, there’s going to be book presentation, you know a lot of activities that would span into eight weeks. We are in a celebration year. This year marks my 40th year on stage, it’s my year!

If God spares your life for the next 40 years, what would you hope to achieve?

Well, looking at my age I’m almost 55 so adding forty that’s 95, that’s too much (Laughs). Whatever years are left of my life, I want to be thankful to God for giving me the grace to live a good life and the ability to impact positively on the lives of people. So the one thing I want to see is that I stay around longer, to be a good role model to people, to advise them, to counsel them especially the youths and I hope to be always there for them. You know people go to South Africa to see Nelson Mandela to seek inspiration from the man who was able to come out good after going through years of torture and apartheid so yes, I want to be able to spend the rest of my life being of help to people.

Are you going to retire at any point? Not just recording albums but from performing?

No way, I still have very strong bones and as long as they can still function optimally I will continue to perform and do that which I’m known for which has brought joy to countless people over the years. (the net ng)

One Thing President Jonathan Has Lost Is His Goodwill
Marriage Galore: Top 10 Nigerian Celebs Tie The Knot In One Month