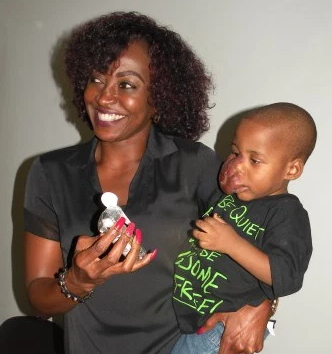 May 4, 2017 – Kate Henshaw Backs Out Of Baby Michael Alvez Case As Family Lawyer Requests For Audited Account Of His Medical Fund

Nollywood actress, Kate Henshaw, says she and her friends have made urgent arrangement to return the funds raised for Michael Alvez, a two-year-old boy born with an ulcerous growth in the face.

Henshaw added that she had asked Nigerians to stop paying into an account opened for the victim’s treatment, adding that the development was as a result of the request of the family that she stopped assisting the family after disagreements over Michael’s welfare.

The agency carrying out the fundraising for Michael, Project Alert said it was worried by the way family members are handling the 2-year-old baby boy in the absence of his mother, who is not in her right ming.

Project alert wrote the Lagos State Government on November 18, 2016, asking for a shelter for Michael.

The state government, in its response in December 2016, approved a home for Michael, which was allegedly rejected by the family.

The child’s aunt, Sidi, was said to have again asked the government to release the child to her.

A letter from the Lagos State Government, dated February 23, 2017, and directed to Sidi, approved the request.

By March 3, a lawyer representing the baby’s family, E.G. Adelemoni, wrote to the management of Project Alert, demanding a statement of the audited account of Michael’s medical fund.

Adelemoni, in the letter, said the demand was to ensure that the money was used for what it was intended, including an overseas treatment for Michael.

He threatened legal action if the request was not acceded to within seven days of its receipt.

A reaction from Project Alert’s legal officer, Benjamin Odeh, stated that Henshaw, Aramide Kasunmu, and members of the public were the donors to the account, hence the fundraising team were accountable only to them.

On Wednesday, Project Alert said it had agreed with Henshaw and Kasunmu to return the money to the donors.

So what does it take Kate Henshaw and others to provide an audited report to Michael’s family lawyer????

Why the rush in returning the money to the donors if they have no skeleton in their cupboard?