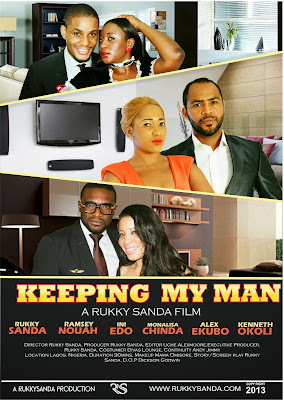 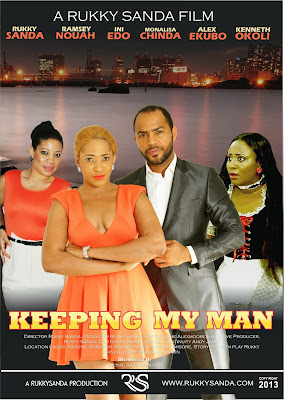 Unlike the regular movie premiere that obtains, star actress Rukky Sanda will be upping the ante as she premieres her new movie ‘Keeping My Man’. She will be having a dinner-like premiere at Wheat Baker, in Victoria Island, Lagos on Wednesday 25th September, 2013. Movie cast, celebrities and special guests from all walks of life will be present.

Meanwhile the movie opens in cinema nationwide two days later, Friday. Rukky will be leading other actors in the movie including Ramsey Nouah, Ini Edo, Monalisa Chinda, Alex Ekubo and Karen Igho to sign autograph, exchange pleasantries and be at the box-office to meet and interact with fans and people who’ll buy tickets for the movie.

In 2008, star actress, Rukky Sanda delved into movie production with ‘Lethal Woman’. The movie had mixed reviews. To some, it was a bang while to others it was a nay. Rukky didn’t stop there; she has gone on to produce over six movies.

She will add a leaf to her feather-growing-cap as her movie, ’Keeping My Man’ will make cinema debut. That will be her first cinema screening as a producer.

‘Keeping My Man’ is the story of three women, Rukky, Ini Edo and Monalisa who thrive to keep the spark in their marriages. Zion (Rukky) and Tokunbo (Ramsey Nouah) are the seemly perfect couple with excessive public display of affection. Maya (Ini Edo) looks up to them while Tamar (Monalisa) is the free-spirited woman who questions the role of African woman in a marriage. But all in all, nothing is as it seems.

Keeping My Man explores the length couples would go, doing all it takes to keep the bliss years after exchanging marital vow. It is a family story of love, deceit, grit and betrayal.

Speaking on her cinema debut, Rukky said she is hoping for the best. ‘I have heard good tales and tales of woes from some of my colleagues that screened at the cinema but I am hoping for the best. Besides that, ‘Keeping My Man’ is the kind of story young people like. It revolves around fear of the future, marriage, relationship and the kind of things we basically worry about. And if you look at choice of casts, they are actors that excite the crowd and Ramsey Nouah is returning to screen after a long while’ Rukky disclosed.

The movie will be one of the comeback movies for leading Nollywood star, Ramsey Nouah who has been missing in action for a long while.

The movie which stars Ramsey Noauh, Alex Ekubo, Karen Igho and Kenneth Okoli will be available in cinema nationwide from Friday, September 27.