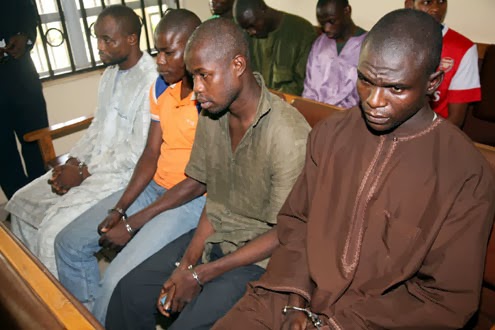 Operatives from Nigeria’s Department of State Security Services,(SSS) said they have arrested 12 suspected members of the Islamic sect, Boko Haram, during an operation behind Apo Legislative Quarters in Abuja early on Friday morning.

In a statement by the Deputy Director, Public Relations, DSS, Marilyn Ogar, the agency said the operation “was sequel to information obtained from two (2) Boko Haram elements Kamal Abdullahi and Mohammed Adamu, who had earlier been arrested for terrorist activities.

They led the security team to uncompleted buildings where arms were purported to have been buried underground”.

She however said as the “team commenced digging for the arms, they came under heavy gunfire attack by other Boko Haram elements within the area, which prompted immediate response from the security team.

As a result, some persons were injured and twelve (12) others have been arrested in connection with the incident, and are making useful statements”.

She was however silent on the number of people that died during its confrontation with the alleged Boko Haram suspects.

Earlier reports this morning had indicated that about eight people were killed in the uncompleted building by some unidentified gunmen while scores of others were injured. Remains of some of those killed were seen lying on the ground during a visit to the area early this morning.

The DSS however said “Normalcy has returned to the area.
Members of the public are advised to go about their normal businesses, as appropriate security measures have been placed to ensure the safety of citizens in the FCT”.

It therefore “reiterated the need for all Nigerians to be vigilant of their immediate environment and promptly report suspicious activities to security agencies. Our National security must remain the collective responsibility of all Nigerians”.

A resident of the area said they began to hear gunshots around 00:30am. The shootings continue for several hours

Altine Daniel, Public Relations officer of Federal Capital Territory Police Command had earlier told P.M. NEWS that the Police were yet to ascertain the actual number of people killed in the grisly incident.

“The exact number I can’t give you now but we have commenced our investigation,” said Daniel.

There were also speculations that the owner of the property made up of two buildings of six rooms each has severally warned the squatters to vacate the building in the past few days.

The last known attack by the sect in Abuja was in November last year, when gunmen stormed a special anti-robbery police barracks, freeing 30 prisoners and killing two police officers. That attack was claimed by Ansaru, a Boko Haram offshoot.

By far the most high-profile attack in the capital was in August 2011, when a suicide car bomb tore through the U.N. building, killing 24 people and gaining Boko Haram international notoriety.

The bulk of Islamist attacks occur in the remote northeast, where Boko Haram had its first major uprising in 2009.