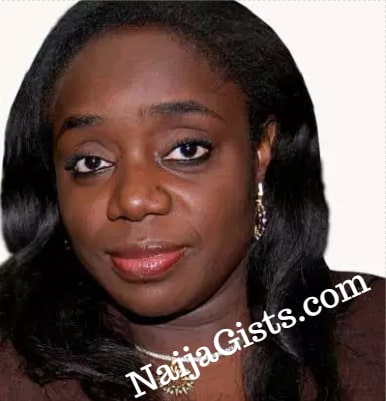 Although the whereabouts of the immediate past Finance minister, Kemi Adeosun is unknown, some sources close to her said she has fled the shores of Nigeria to her country of birth for fear of being arrested and persecuted for presenting fake NYSC certificate of exception.

An official of the Ministry of finance said there were indications that the big madam fled the country on Saturday via a British Airways flight that departed Lagos for London to escape her impending arrest.

The former minister was exposed after the People’s Democratic Party raised an alarm that her NYSC certificate was forged.

Although she argued for a while, she later admitted that the certificate was forged by a former NYSC official because she was too old to serve.

Now That Linda Ikeji Is A Mother, We Hope She Stops Living A Fake Life
Saudi Arabia Embassy In Nigeria Aiding Human Traffickers Luring Nigerian Women To Work As Slaves In Saudi