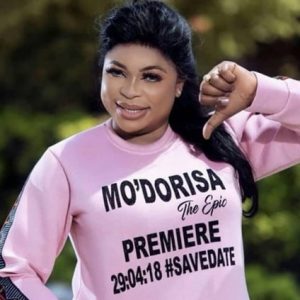 Nollywood Yoruba filmmaker, actress Kemi Afolabi has released the official trailer and the premiere date of her new epic film.

Come Sunday the 29th of April  2018, the all female cast movie will premiere in Lagos.

Here is what she said about her new epic work:

“Mo’dorisa tells the story of Dayese village which never remained the same after a whirlwind swept away all male residents (both young and old) leaving the women with no choice but to take the bull by the horn.”

“The Epic movie showcases the impact, strength, importance and problem solving skills of women without the male gender,” said Afolabi.

“The storyline passes across strong cultural views and tradition, richly inclined, unique, interesting, educative and full of suspense. It will keep you at the edge of your seats.”

See official trailer and behind the scene video clips below