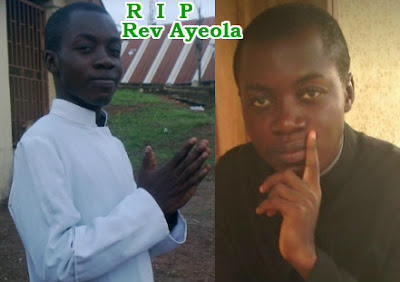 The Bishop of the Anglican Church, Ondo Central Missionary Diocese, Rt. Revd. Samuel Ojo, has lamented the killing of the Chaplain of the church, Revd. David Ayeola.

Ayeola was killed by suspected kidnappers in Ekiti State.

Ojo, who escaped abduction by a whisker, said the gunmen were Fulani herdsmen, calling on the police to bring the perpetrators to book.

PUNCH Metro had reported that Ayeola was kidnapped by the gunmen last Thursday while travelling with the bishop, his wife and the driver.

The kidnappers had demanded N100m ransom, but the church offered N500,000.

The police were attempting to rescue the 26-year-old when he was shot dead by the gunmen, who immediately fled the scene.

Ojo, who had gone into hiding after the attack, told our correspondent on Monday that the death of the reverend shook the church, adding that no service was held on Sunday in all the parishes of the denomination in Ondo State.

Recounting the attack that led to the capture of Ayeola, he said, “My in-law, an indigene of Ayegbaju Ekiti, had died and my wife, the chaplain, as well as my driver followed me to the village last Tuesday in preparation for the burial.

“On Thursday, we went to my hometown in Imojo Ekiti. Around 6pm, we left the village to return to Ayegbaju, venue of the burial. However, when we got to a place between Imojo and Oye Ekiti, some masked gunmen emerged from the bush, blocked the road and started shooting continuously.

“Our driver attempted to turn back, but he discovered that members of the gang were also coming from the back. He suddenly drove into the forest. Myself, my wife, the reverend, and the driver ran into the bush. I told them to run for their lives and we fled in different directions. I crawled in the forest for hours.”

He explained that he and his wife, together with the driver, later emerged in another town at different times, from where they informed villagers and relatives about the incident.

He said late in the night, he was informed that the kidnappers had called Akure, the church’s headquarters, to demand the payment of the N100m ransom.

“Afterwards, the kidnappers started calling me with the reverend phone number. From their accents, they sounded like Fulani. They were threatening to kill him if we didn’t pay the money. When I offered them N500,000, they insulted me and the church.

“Meanwhile, commissioners of police in Ekiti and Ondo states had deployed policemen in the three divisions surrounding the place to look for him. The hunters association in the town had also moved into the forest to search for him.

“On Saturday, I was called by the kidnappers and I told them that we were looking for the money. By 11pm, some indigenes who went to their farm, sighted three men with guns. They saw the priest with them. They informed the police and that was how the police and the hunters invaded the forest to rescue him,” he added.

He explained that the policemen and the kidnappers engaged in a shootout, saying the police later backed off in order not to endanger the life of the hostage.

Ojo said the gunmen shot and killed the priest.

“I ordained him in 2015. He was the best at the college of theology in his set. He was an excellent and vibrant preacher of the gospel. We are all saddened by his death. We want the police to get the suspects and bring them to book. This is a great loss to the church,” he added.