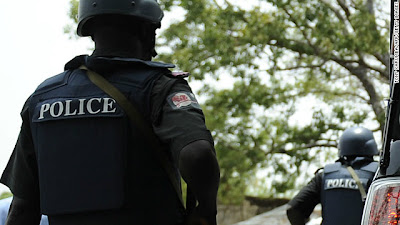 Emmanuel Agbesi is the assembly pastor of the Mountain of Fire and Miracle Ministries (MFM), South East Province Two headquarters in Aba, Abia State. On Monday, February 18, 2013, he was abducted by three men in Aba.

He was heading to his church on Ndusoro Street, off Ngwa Road in his Volkswagen Golf-car when the hoodlums stopped him at gun point. As he stopped, the kidnappers jumped into his car and ordered him to drive towards the Umangasi axis of the city.

Having been warned he (pastor) should not do anything funny or his life would be wasted, he obeyed them and that began his ordeal.

This is his story: “On February 18, 2013, I was coming from my house, No. 11 Ndusoro Street to the church. On getting to a junction on the road early that morning, three men stopped me.

I thought they were policemen because they had guns. They asked me to open the door of my car. I did and two of them went to the back seat and the third one sat in the front with me and ordered me to move. While I was moving they hit me by the side with guns, that I should move faster, I obeyed.

At a point, they asked, ‘where is the money’? I told them I had no agreement with them about any money. We kept going. They were directing me where to go because they already warned me that if I made any noise or effort to stop them, they were ready to die and before then, they would make sure my own life was wasted, that I should try to cooperate with them.

“So we kept going and on getting to the Umungasi area, they asked me to stop. They searched and took everything I had on me. As I wanted to move, they said I should come down and get to the back seat and one of them took over the car.

As we moved, before we got to any army checkpoint, they would look me straight in the eyes and warned me not to do any thing funny before the soldiers, that they were ready to kill me and waste their own lives, which they said were of no value to them. “But on getting to Umuikaa junction, along the Enugu/Part Harcourt Expressway, there was an incident.

The soldiers were doing thorough checking, they were checking booths of vehicles and asking questions; in fact, there was traffic build-up due to the thoroughness of the soldiers. “So when my abductors observed what was going on, again they warned me not to shout, that they were ready to die and that they will waste my life before dying.

The next thing I noticed was that the one driving just zoomed off and one of the soldiers was shouting ‘stop!, stop! The driver was fast and he drove past the checkpoint, heading towards Umuahia. As we were moving, the kidnappers were watching if the soldiers were coming after them and when they observed that nobody was chasing them, they made a U-turn and headed towards Owerri, through Owerrinta.

“When we got to Owerri, they headed towards Owerri- Onitsha Expressway and on getting to the Coca-Cola spot, and not too far, they made U-turn. As they were moving, they were making phone calls; I didn’t know who they were talking to. After the phone calls, they immediately turned right and veered off the expressway, parked and then asked me to come down, which I did.

I followed them through a path and we entered a bush near the Immigration office. It was there I sustained injuries because they forced me to sit down, beat me and many times threatened to kill me. “They collected my two handsets and other things I had on me.

They opened the handsets, collected the SIM cards and threw them on the ground, saying they had no need for my type of handsets. As the beating and threats continued, there was this sound of siren blaring from an on coming vehicle. Then next thing, one of them alerted others. And for fear it was police that was coming after them, one of them said, ‘let’s leave this man and go.’

Another one disagreed and said they should take me along with them. The third said ‘no we cannot go with him’ and they started arguing whether to go with me or not. Eventually they fled, leaving me behind. “As they left I got up and managed to walk out to the road through the bush path with only one leg of rubber slippers.

When I regained consciousness, I saw the two handsets, but without the SIM cards and the batteries. I also saw my wallet, but they had taken all the money in it. While looking for the car key, I came out to an open place, there I saw people. “I met a man waiting for a commercial vehicle and I inquired from him where I was. I have forgotten what he called the place.

I also asked him to direct me to where I could make a call. It was only my wife’s number that I could readily recollect. When I called, she did not pick because the number was strange to her. But after several attempts, she picked and I told her my story. She then called the church members who then contacted the police to rescue me back to Aba.

“Before the incident, there had been several threats on my life from the children of our late landlord, who sold a piece of land to the church. They claimed I was the one preventing them from enjoying their fathers’ property. They had harassed church members severally on this issue and the police were aware of their previous actions.

The men, Kelechi Kingsley Orji Ugwumba and Ogbonnaya Orji Ugwumba once came to the church to threaten the senior pastor with cutlass, and they have fought us physically on several occasions. “Again on Sunday, a day before my abduction, during the church service which I conducted, we saw four unknown faces patrolling the premises in all-black attire and on Monday I was kidnapped.

One of my captors was wearing the same black dress.”Based on these earlier threats to life, immediately the incident happened, police in Aba were alerted and the area commander, Rabiu Dayi (ACP), mobilized his men led by Anari N. Anari into action.

The police arrested the two Ugwumba brothers who had threatened to kidnap the pastor. As at the time of filing this report, the two arrested men were still helping the police in their investigations.