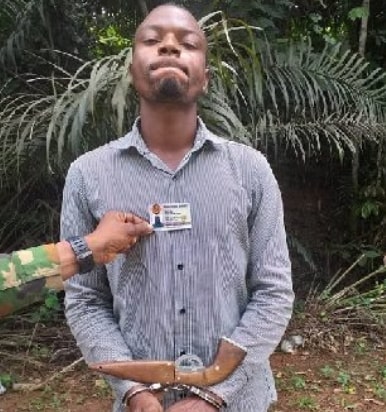 A member of a kidnap syndicate using military camouflages to terrorize the people of Ondo state for ransom has been arrested.

The suspect identified as Victor John was arrested by the men of the Nigeria Army [NA] 32 Artillery Brigade of Owena Barracks, Akure.

A military source  explained that the suspect was apprehended at Ore in Odigbo Local Government Area of the state during a-stop-search operation.

“Our men from the Anti-Kidnapping Squad of the military has recorded another feat after apprehending one suspect of a kidnapping group.”

“They arrested the suspect inside a vehicle during our stop and search operation which was carried out by our gallant officers along the road in Ore town.”

“After his arrest, he confessed been a member of a kidnapping syndicate that had been terrorizing the people of Ondo state”.

The source said the items found in possession of the suspect included a military Identity card and one locally made gun.