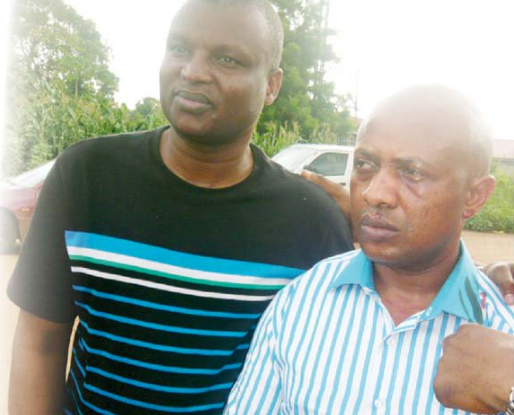 June 19, 2017 – Kidnapper Evans Tells Police Full Story Of His Life, How He Met His Wife & His Modes Of Operation

The leader of a notorious kidnapping gang arrested in Lagos last Saturday, Chukumdubem Onwuamadike a.k.a. Evans, has opened up on the circumstances that warranted his transition from a harmless spare parts dealer to a deadly armed robber and kidnapper.

Evans, who narrated his involvement with the kidnapping gang that tormented the entire nation and left security agents sleepless for years in an interview with our correspondent, also revealed his exploits, his love life and exotic lifestyle, including furnishing a house he bought for N130 million with the sum of N100 million. 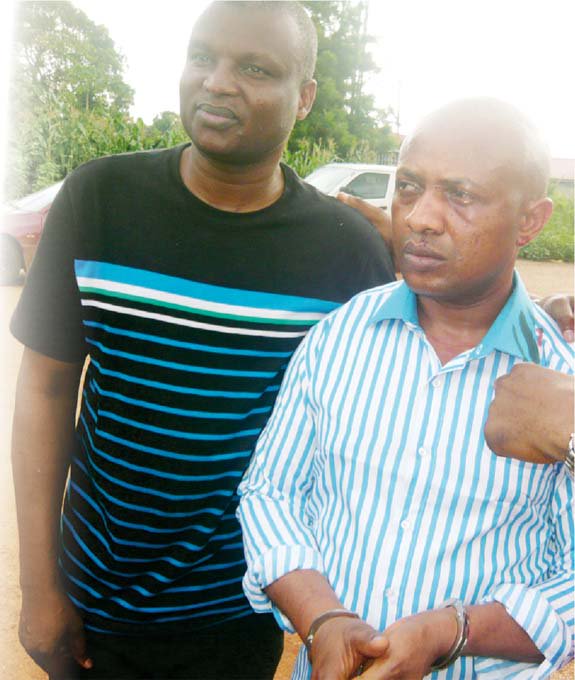 He also spoke about the kind of relationship he had with his father and mother as well as his siblings.

“My name is Chukumdubem Onwuamadike a.k.a. Evans. I was born in 1981 into the Onwuamadike family in Akamilli village, Umudim village, Anedo. I dropped out in JSS II because there was no money to go further.

“My father was born in 1960 and he had three wives. His name is Mr. Stephen Onwuamadike. My mother is the first wife with four boys and two girls. They are Somadina, Nnemeka, Chukwuemelie, and myself. My two sisters are Nzube and Chigozie.

“Later, I served one Jubako, a motor spare parts dealer in Nnewi, for five years and he never settled any of his boys.

“I left from East to Lagos and started selling black market phones at Alafia but resided in Surulere area.

“Somebody promised to send me to Holland but it did not work. I collected N200,000 from friends plus the N700,000 I saved and gave it to somebody to procure a visa and other things I needed to travel abroad, but the person disappeared with my hard earned money.

“I started selling fairly used motor parts in Ladipo Market. I met one Kingsley who was into armed robbery but I did not do robbery with him.

“I gathered some money and travelled to South Africa to sell drugs between 2006 and 2008. That was how I started drug business in South Africa.

“When I had a misunderstanding with my fellow drug pusher who planned to swindle me by selling drugs and telling me that the buyers had not made any payment, I confronted him and he brought out his pistol and shot me with the intention of collecting the entire drug money. I was taken to St. Clamout Hospital in Cape Town where I was operated upon.

“I later met Kingsley and Ehis in Nigeria when I went to treat my wound with native medicine in 2008. We promised to do something in Edo State. We started armed robbery. It was the Chief Superintendent of Police CSP Patrick that chased us out of Edo State and we relocated to Lagos. He was then the MOPOL 2 Commander.

“We carried out robbery operations on Port Harcourt Road, Aba where we used a truck to block a bullion van and collected N70 million. We used to be about 20 in the gang. Our members include Too Much Money and an Hausa boy, Nwangwa. There is a member called MD and one called Obele.

“I met my wife, Precious, along the road in Uruagu village, Nnewi. We are 11 years in marriage. She was about 15 years old when I married her, because she was about to take her West African School Certificate Examination.

“I promised to pay her school fees, but when I impregnated her, she stopped school and stayed with my dad in the village till she gave birth.

“I rented a three-bedroom flat at Marwa Road in Satellite Town and shared it with a friend. We had three boys and two girls. I was trading in Ladipo when I married my wife, Precious. I adopted the name Evans when I was in JSS II.”

“It went into robbery because I lost my shop in Ladipo for travelling abroad. I decided to look for money to take care of my three children then. I was also looking for money to travel to Brazil.

“When I told Kingsley that I needed money, he said he would link me to somebody named Too-Much-Money. From him I got MD’s contact. I started going into armed robbery operations.

“I got money and bought a Honda ‘Baby Boy’ car for N1.8 million. I opened a shop at Aspanda in Trade Fair area where I was selling car fitters. I also spent N6.1 million on the goods I put in my shop.

“My gang members at Ladipo at that time were Ejima, Omo, Benin Papa, Sado, Papa Twins, Prince Joe, Alhaji Ibo and Papa Kekere. They were all traders in Ladipo.

“I later formed a three-man gang, namely myself, Eyis and Harrison. We kidnapped Kings Paints boss and got N7 million, Dan Odete N40 million, Randeki N11 million when I relocated to Lagos. We also kidnapped Iyi Technical and got N100 million, but Henry ran away with the money.

Asked about his relationship with women, he sad: “I am not a womanizer. My friend was missing and I took care of his wife and children with my money. I did not have sex with the woman. I did not touch any woman in Lagos except my wife. I moved my wife to Ghana when I was in Satellite Town.”

Evans said he relocated to Lagos when there was a problem in Benin and met one Aku Uche who taught him how to make money from kidnapping.

He said: “We picked a generator seller, Raymond Okoye, at Alaba. We picked him where he used to drink beer and we got N40 million from him. My share was N3.5 million. It was Uche who brought the three Ak47 rifles we used in the operation.

“We also kidnapped Ucheson when he was going home at Sixth Avenue, Festac Town. He was coming back from the market. He paid one million dollars.

“It is the person who brought material and the job we call the master. Uche brought the Sienna car we used in robbing the (boss of) Young Shall Grow motors. Baba Eko brought the job.

“We kidnapped Okija man in Ajao Estate and got N60 million. We did not succeed in kidnapping Young Shall Grow. Uche, Hunchman and Dr died in the operation when bullets hit them. I ran to Abuja to hide.

“After the Young Shall Grow operation, I became the boss. I secured Uche’s equipment and rented a house in Igando in 2014. I did two jobs at Amuwo Odofin and Festac. We kidnapped Chief Uduji in Alaba and he paid one million dollars.

“I treated Chief Uduji with rose fin injection when he became sick. I got how to treat him from the internet. I used to buy Roche drug N4,500 each. It was the pan of his car that wounded him. His wife in Canada phoned me and said he should not be allowed to die. Other members of my gang ran away thinking that the chief would die.

“We also picked Ojukwu Cosmos from his house at 21 Close, Festac. He paid 350,000 dollars. We picked Francis Umeh who paid 300,000 dollars. Unachukwu had no money and paid only N30 million.

“Donatus who is a pharmacist we picked at Ilupeju paid N223,000 Euros. I had three vehicles and later sold two to meet up with my financial challenges.

“I did not befriend Okey’s wife, Amaka. She said her husband was missing and I was giving her money to sustain her family. I did not marry Iwuji’s wife. I did not know that she had a husband. She is my childhood friend. I thought that she had no husband.”

“I feel bad. I feel for my children, wife, mother and friends. It has happened, it has happened. Even my mother is suffering partial stroke because of the kidnapping work I am doing. I was taking care of her till I was arrested.

“She is in the village in Nnewi. At times she refused to take the money I sent to her, telling me that I should stop kidnapping people; that it was making her sad.

“How can my mother prepare charms for me when she did not support my kidnapping job? I do not use charms; I used brain.

The commander of Inspector General of Police Intelligence Team (IRT), an Assistant Commissioner of Police (ACP) Abba Kyari used brain to get me. If not for Kyari, I would not have been arrested.”

“I do carry arms but I do not encourage abuse of firearms. I do not allow members who kill victims to participate in an operation I am interested in. I even treated one victim who became very sick. I cannot allow a victim to die if I can save him.

“What is true is that you can be kept hostage till you pay the last kobo. I used the money to pay those who play different roles in the kidnapping job. Anybody who says he is not well paid is a liar. Once we got a ransom, we came together to share it. Those who could not come to where we were sharing still got something reasonable. At least N2 million or N1.5 million for whatever role you played.

“I also do not encourage stealing victims’ property. I was not happy when Ikechukwu and Nwosu stole the golden ring of a victim. If not for our arrest, I would have made them to return the ring to the owner.