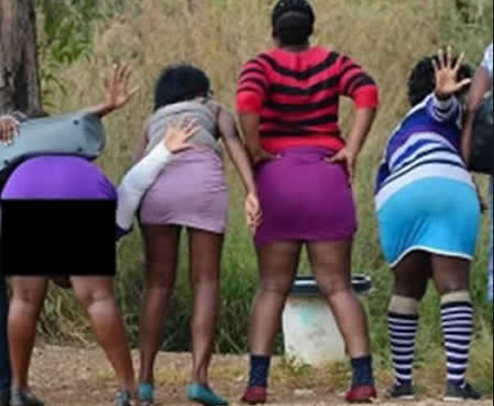 According to reports, these sex workers would not mind a plate staple food common in East Africa known as Fufu as entertainment by their customers.

The report added that most of these sex workers are teenage school drop-outs.

One of them who did not want her name mentioned said their business is experiencing a downturn which leaves them with no option than to lower their price in order for them to remain in business.

According to her, it was so difficult to get Clients who are willing to offer them their normal rate hence they had to settle for anything including a plate of sadza.

“If you find someone who buys you sadza, you have to thank your stars for giving you a good fortune.”

She also explained that things are no longer rosy for them as about five of them has to share a room.

She revealed, “about five of us share a single room at the motel and pay US$10 per head/month each.

Mberengwa, a district in Midland province in the country is reported to be in intense hunger after a rainy season followed by a heavy flood that disturbed their plants and even displaced thousands of people.

The older folks in the business, however, lament that the presence of the young ones in the business is making them go extinct as most clients go for the younger and fresher blood than them.

Other residents in the community, on the other hand, stated that they were worried at the increasing number of these sex workers as they fear that sexually transmitted diseases would be the rise.

It was also rumoured that sex workers are looking beyond their catchment area and opting to shift their base to a neighbouring community.

Continue Reading
You may also like...
Related Topics:prostitutes, sale, sex

Kidnapper Evans Tells Police Full Story Of His Life: My Transition From Spare Part Dealer To A Robber
Lassa Fever Kills Nursing Student In Anambra State, 65 Who Had Contact With Her Placed Under Watch