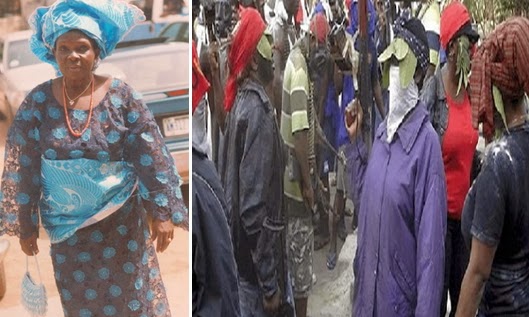 The woman pictured left above has lost all her fingers. She is the wife of a former Nigerian Army Major who was kidnapped alongside her husband, Azum Asoya last week.

Azum Asoya, a retired army major and his 55-year-old wife, Elizabeth, whose fingers were sent in a parcel to their family members were Sunday freed by kidnappers after 17 days of their abduction.

The fingers were last week delivered to the family at Okpanam, Oshimili North Local Council of Delta State and have since been handed over to the police in Asaba.

They were abducted on 30 November by unknown gunmen who apparently laid ambush on them, when they were about entering their Sports Utility Vehicle (SUV), on their way from a burial ceremony.

The couple was allegedly dropped at Otulu, Aniocha North Local Government Area of Delta State, from where they were eventually helped to get to their family house in Okpanam.

A family source who begged not to be named, disclosed that the retired major and his wife were beaten by rain several times while in captivity, and that the sores on their fingers were treated with urine, by their kidnappers.

The source further confirmed that the couple are presently recuperating at an undisclosed hospital where they are being treated for blood pressure and their chopped off fingers,

It was gathered that a close associate of the family assisted to raise part of the N5 million ransom paid to facilitate their release when they discovered that police men were helpless in the rescue mission especially when there was serious threat from the kidnappers to eliminate them after cutting the fingers.

the kidnappers had during the week, sent a message along with two fingers of the couple, threatening to go further, should the family members delay to pay N9 million ransom negotiated.

The abductors had initially demanded N30 million to free their victims but later reduced it to N9 million, while the family bargained for N3 million until someone raised additional N2 million for them, bringing the ransom paid to N5 million.

However, the Delta state police command PRO, Mr. Lucky Uyabeme, said the couple was released unconditionally because the kidnappers could not cope with the hot trail by his men.

This is terrible. May God deliver us from these evil beasts in human skin.