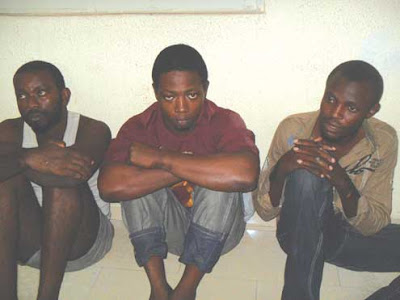 A Delta State High Court in Asaba has convicted and sentenced three men, Igane Enekorogha, 37, a fisherman; Godwin Sibede, 36, a driver; and Job Burutu, 47; to 60 years imprisonment with hard labour, for kidnapping.

The convicts‎ were found guilty of the four-count charge of kidnapping, conspiracy to commit kidnapping, demanding property with menace and illegal possession of firearms.
The three convicts, with another member of their four-man kidnapping gang still at large, forcefully abducted Tobeckwukwu Ochei, a younger brother to former Speaker of Delta State House of Assembly Speaker, Right Honourable Victor Ochei, on 27 March, 2012, 10 days after his wedding ceremony.

During the trial, the prosecutor from the Department of Public Prosecutions of the Delta State Ministry of Justice, Samuel Nwanne, told the court that the convict with others now at large, on or about 27th March, 2012, at Asaba, within the Asaba Judicial Division, kidnapped Tobeckwukwu Donald Ochei in front of the gate of his house at about 6:30 am while armed with guns and whisked him away in their operational vehicle to an unknown location before he was later rescued by men of the DSS after spending four days in the kidnappers’ den, identified as an Iraq Community inside the Creeks.

Prosecution also told the court that the kidnappers also made a call to the victim’s wife demanding a ransom of N300 million from the family before he could be released.
The Court presided over by Hon. Justice Cletus Emifoniye, while delivering its verdict, sentenced by the convicts to 10 years imprisonment each with hard labour for the offence of kidnapping, seven years imprisonment each for conspiracy, three years in jail for each of the accused persons for demanding the sum of N300 million as ransom and another 10 years jail term each for illegal possession of firearms.

The court ruled that the sentences are to run concurrently.