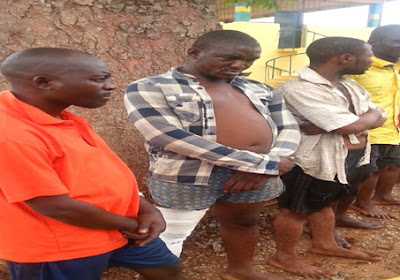 The Command’s Police Public Relations Officer, DSP Ali Okechukwu, made the disclosure on Thursday in Awkuzu, while briefing journalists.

Okechukwu explained that the arrest, carried out by officers of the Special Anti-Robbery Squad (SARS) was as a result of information volunteered by the public.

He said that the corper on March 22, conspired with another suspect and broke into the Igwe’s lodge at Abagana and robbed students of National Open University of their handsets, laptops and cash of N92, 000.

“On March 6 at about 2100hrs, four kidnappers who hailed from Obosi in Idemili Local Government, lured their victim (a young lady), out of Onitsha Sports Club, via Facebook to Oguta Road in Onitsha, where she was kidnapped at an uncompleted building.

“The victim was stripped naked and video recorded after robbing her of a Samsung Galaxy phone, blue tap phone and wrist watch all valued at N90,000,” Okechukwu said.

He also said that on Feb. 23, another four armed robbery suspects conspired and robbed one Mr Ikechukwu Ogeh of N3 million cash at gun-point, at the Amansea section of the Awka-Enugu expressway.

Okechukwu who said that all the suspects confessed to the crimes, noted that items recovered from them included, one locally made short gun with live cartridge and an axe.