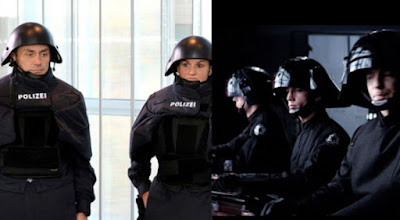 Nigerian, Iraqi Arrested In Germany Over Tie To ISIS Released By German Police

The 29 year-old Nigerian and a 46 year-old Iraqi, detained by German police on suspicion of having links with Islamic State and of planning a “serious act of violence” have been released.

Bavaria’s office of criminal investigation announced this on Friday.

German police held the two men on Thursday after receiving a tip off. Security sources had provided information that both could have been in contact with members of the Islamic State militant group.

“During the course of comprehensive investigations, the criminal charge of planning a serious act of violent subversion could not yet be further corroborated or confirmed,” Bavaria’s criminal investigation office said in a statement.

It added that neither searches of the men’s homes or rooms nor questioning had given any such clues.

Security in European countries has been intensified since attacks claimed by Islamic state that killed 31 people in Brussels in March and 130 in Paris in November.