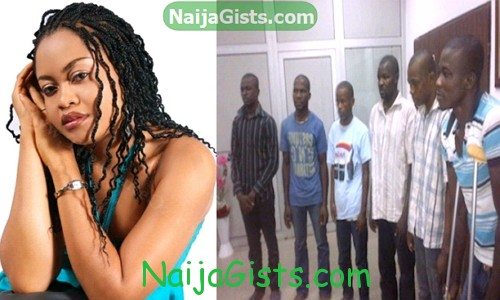 Six suspects involved with the kidnapping of Nigeria’s Nollywoood actress and Senior Special Assistant to Imo state Government, Nkiru Sylvanus were on Tuesday paraded at a joint press briefing conducted by the State Security Sercice, SSS and the Nigeria Police Force, NPF, at the SSS headquarters in Abuja.

They were also arrested in connection with the kidnapping of Mr. Uche Okoli and Kenneth Okolie on 15th December, 2012 at Nworie street, Akanchawa roundabout in Owerri, the Imo state capital.

Ndidi Nwokoma Cletus, 30 years old dismissed Mobile Police Constable, is said to be an indigene of Umuokedinma Awara in Ohaji Egbema Local Government Area of Imo state. He confessed to being the leader of a notorious nine man armed gang which carried out the kidnap.

The Nollywood actress was released after a ransom of N8 million was paid. She spent six days in the kidnapper’s custody.