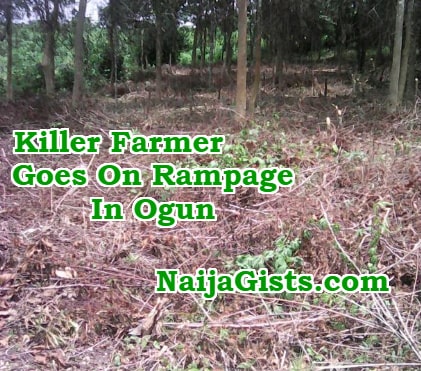 It followed threats by a farmer to kill eight more people after he had shot dead two members of the community last Wednesday.

The grieving community claimed that the farmer identified as Oladosu Nureni allegedly shot the victims – Ajayi Onifade, who until his killing, was the Amuludun of Iwoyeland and Olatunji Ayinla, at different locations.

According to The Nation, Nureni, whose house is located few buildings away from that of the late Onifade, shot the victim at close range when he was on his way to farm. Ayinla, who was part of a search team for the suspect, was, however, shot dead by Nureni during a manhunt for him.

It was learnt that Onifade did not die at the scene of attack. He was rescued and taken to the Federal Medical Centre, Abeokuta for treatment, but died last Friday.

Onifade’s eldest child, Seyi, told reporters that the case has been reported at the Ilaro Divisional Police Headquarters, Ilaro, and wondered why the suspect has not yet arrested by the police.

Seyi urged the police to act fast and apprehend the suspect, alleging that his conduct portends further danger to the community as he kept threatening to deal ruthlessly with anybody, who dared to be part of the search party for him.