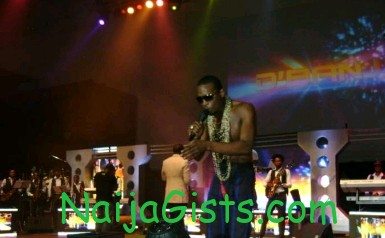 So, the Koko Concert went down last night.

“The worst day of my life! Dec 27th,Koko concert. Despite d negativity, I managed to hold my head up nd stay positive! Home now..#NeverAgain,” Channel O presenter, Denrele Edun tweeted in the wee hours of Friday.

Even by his very lofty eccentric standards, the wild-haired one, could not deal with this audition for the steel-hearted, with experience in covering long distances by foot.

Like @utomisphere tweeted, this one was the survival of the fittest. His tweet read: “Koko Concert was actually a scouting session for Nigeria’s next Olympians.”

So, holla, if you passed it. Tweet it, trumpet it, tell it loud and clear. Like @Sirkastiq added, “No really, those of you who are the koko concert survivors need to add it to your bios. Such feat deserves respect.”

But beyond all the Koko Walk of Life, dusty shoes, disappearing make-up, noisesome pestilence and lustful cravings to see Idris Elba, this is one battle D’Banj has lost, as he tries to outdo former business partner, Don Jazzy.

Don Jazzy opens PoP, D’Banj also announces the opening of his night club in Victoria Island. Please note, by this time, both are already CEOs of labels, that are trying to get off the ground.

Not satisfied with all that glory, D’Banj goes ahead and organises the Koko Concert, which previously featured all the members of the defunct MoHits Crew. This time around, the Kokomaster went for international flavour – Hollywood actor Idris Elba, Pusha T and Big Sean, were here in all their might.

One sensitive area he conveniently ignored, was logistics. Even with all the ravings and rantings, it was a good show from all accounts. But imagine it was staged at the Expo Hall and not the Eko Atlantic (or is it Bar Beach now)?

A lot of Nigerians are not happy right now with D’Banj.

All attention is now on Don Jazzy. Will he or will not swallow the bait and stage his own concert?