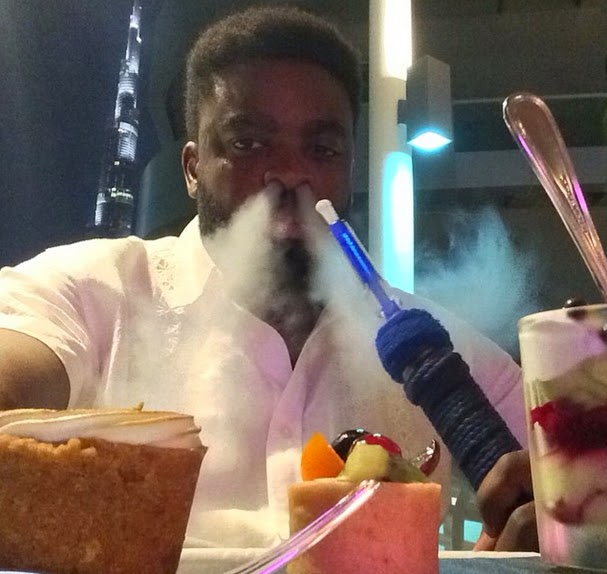 As earlier reported by NaijaGists.com, Nollywood actor Kunle Afolayan indulge in a Shisha smoking pipe during his vacation time in Dubai.

Interestingly, the photo did not go well with some of his followers who argued that as a role model, he shouldn’t have flaunt such act of indecency on social medial.

A fan wrote: ” Haba ! No bros, this shouldn’t be you bah. You fall my hands. I expect you to know the danger of what you are doing.

In a quick reply, Kunle Afolayan fired back at him.

“Your hand never fall, danger Nikan ni. I don’t need a preacher on this page. Preach your morals to your children if you have any or take it to church, mosque of shrine. Best bet, delete yourself.”

As many fans showed their anger over the controversial photo, the movie director was forced to reply all his critics.

“I am not a celebrity neither do I see myself as anybody’s role model. I am a professional and human as well. I do what I want to do when I want to do it. Social media is not for kids but adult. Neither is it a church or mosque. My page is my page and I am entitled to display any picture of my choice. For those running their mouth because they claimed to be a fan and buy my film, you are not buying because it’s Kunle but because you derive value. Don’t say because they named today Boxing Day and decide to show your skills. Moreso, maybe some people need to be enlightened. It is Shisha and they come in different flavor like apple etc . If nah cigarettes or weed nko , you for ‘kuku’ abuse my mama! Hypocrisy is a dicease. For those who love me and my work genuinely, I say I love you too. Let’s be civil,”  Kunle Afolayan fussed.

Some celebrities care less about their fans feeling. They feel their life on the screen is different from their private life. Kunle Afolayan got it wrong here by sharing the photo with no caption.

May be he is trying to gain more popularity through controversy.