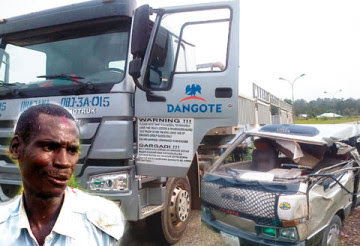 For allegedly damaging the windscreen of a cement-laden articulated vehicle belonging to Dangote Group of Companies, a 20-year-old, Shina Lawal, has appeared before a Surulere Magistrates’ Court, Lagos.

Lawal, who resides at No. 6, Moshalashi St. Iponri, Surulere, is facing a four-count charge bordering on malicious damage and assault.

The accused, however, pleaded not guilty to the charges.
But the prosecutor, Sgt. Christopher Okoliko insisted that the accused committed the offences with others still at large on Aug. 14. at Alaka on Funsho Williams Avenue at 8.00 a.m.

According to him, when the trailer broke down on the expressway, a LASTMA officer helped the driver, Adeoye Abdulrazaq, to tow the truck to Alaka Bus Stop.

“The driver invited a mechanic to repair the truck and while he was working on it, five boys came to demand for money (called settlement in local parlance by area boys) and he reluctantly gave them N5,000.
“Later, another set of five boys came demanding for money and he told them he had no money and that he had settled some people.
“The boys ordered the mechanic to stop work until their demands were met.
“They started beating both the driver and the mechanic and in the process, they damaged the truck,” he said.

Okoliko said the truck’s windscreen, two side mirrors and the driver’s door glass were damaged.

“The sureties must also show evidence of tax payment and live within the court’s jurisdiction.
“One of the sureties must be a blood relation of the accused while the other surety should be living in his own house,” she said.

The case was adjourned to Sept. 13 for mention.