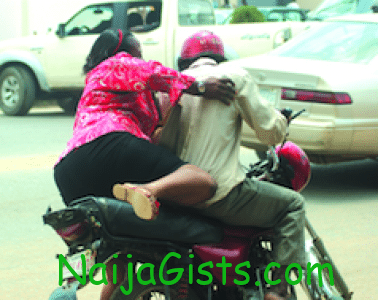 A man has reportedly died in a collision between a motorcycle and petrol truck that occurred early hours of Wednesday, in Sapele, Sapele council area of Delta state.

The incident reportedly happened after a commercial motorcycle, popularly known as ‘okada’ boarded by the deceased collided with the petrol tanker along New Road by Owumi area of the town. The accident happened at about 6am.

While the motorcycle rider was saved, his passenger got mangled between the tyres of the truck.

Witnesses claimed that the tanker had gone to supply fuel to a filling station and was manoeuvring into New Road when the motorcycle slammed on it.

“I was standing at the other side of the road when the Okada passed while the tanker was trying to manoeuvre its way from New road to Owumi road and the next thing we heard was someone screaming and all what I saw was a man under the truck’s rear tyre. Fortunately, the Okada man escaped unhurt,” a lady simply identified as Angela said.

It was further learnt that the accident drew the attention of other okada riders, who accused the truck driver of recklessness and nearly caused havoc in the area.

However, the situation was timely saved as an onlooker reportedly called for security operatives at the Sapele Area Command, who responded promptly and effectively doused the situation.

The Commissioner of Police, Delta State Command, Mr. Adeyinka Adeleke, confirmed the development, noting that the motorcycle ran into the truck.

He said, “the man was not crushed by the truck but the motorcycle ran into it. And the okada rider ran away.”