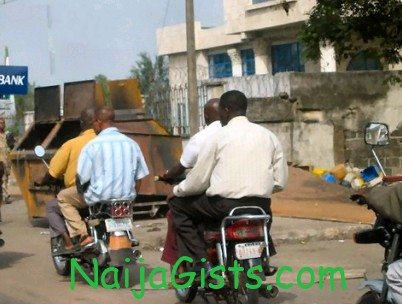 The police in Lagos State have arrested an Okada rider simply identified as Igali for stabbing a father of two, Demola Talabi 42, to death.

The middle-aged Igali allegedly used a screw-driver to stab Talabi on the neck and other parts of his body because he prevented him from stabbing his passenger with whom he had an argument.

The 42-year old Talabi from Ogun State married and had two children, was said to be trying to mediate in the argument between Igali and his passenger over destination.

The late Talabi’s younger brother, Ayo, said that the incident occurred at Osho Street, Opebi and they (members of his family) were contacted. Before he got to the scene, his brother had died due to excessive bleeding.

The body has been deposited at the Lagos State University Teaching Hospital, LASUTH, mortuary for autopsy report.

A witness told vanguard that the late Talabi was on a visit to his mother’s house at 14, Irewole Street, Opebi, when he met the Okada man and a passenger arguing.

He was said to have tried to settle the matter when Igali brought out a screw driver and stabbed him several times.