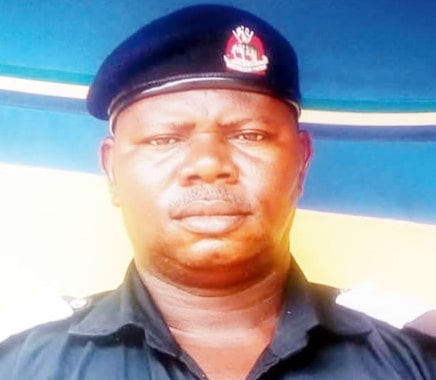 Family members of Lagos Police Inspector, Edighere Orhewere, who was crushed to death by a commercial bus in the Agbara area of Lagos State, have claimed that his death has thrown his dependents into hardship.

According to Metro Plus, the deceased and his colleagues mounted surveillance at a black spot in the Agbara area when the driver of the commercial bus, with number plate KSF 475, lost control of the vehicle due to reckless driving and rammed the policeman from behind.

The driver reportedly abandoned the bus at the scene of the crash and absconded.

While some of the victim’s colleagues ran after the fleeing driver, others tried to rescue the father of seven, but the impact of the crash reportedly broke Orhewere’s waist and spinal cord.

The Inspector died on the spot, while efforts by his colleagues to arrest the fleeing driver proved abortive.

Here is how a security source described his painful death:

“We were at the checkpoint in Agbara and saw the policeman and his colleagues watching over the area, which is always crowded. There had been a lot of reckless driving around the area because it was a festive period. So, while they were at their duty post, in a split second, the LT commercial bus rammed into the policeman.

“When we got there, we saw that the iron rod in front of the bus pierced through his waist and he sustained very deep wound in his waist. His spinal cord was broken due to the impact of the crash and he died on the spot. After the accident, the driver of the bus abandoned the vehicle and ran away.”