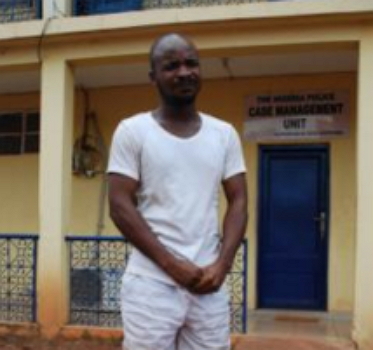 A mild drama happened recently at the Lagos State Police Command headquarter after a sergeant ran in the command few minutes after robbing a lady of her handbag.

The sergeant simply identified as Oluseyi was attached to ‘A Department’ at the state Police Command.

According to sources, Oluseyi was a serial thief, who allegedly used to target females standing along the road. Whenever he robs ladies of their handbags and other valuables, he would drive off in his white Sport Utility Vehicle (SUV), leaving them screaming and crying. He would go for another victim or would drive straight to command, where his office was located. Once he drives into the police command headquarters, he would change his clothes and put on his uniform.

However, nemesis caught up with him after one of his victims traced him to the command. Although the lady was confused when she was finally presented with Oluseyi because he had changed his clothes, she, however, was sure of his car type and colour.

She also recollected three numbers in his number plate. When Oluseyi’s car was searched by policemen who were already getting angry with the lady’s supposed wild allegations, several female handbags, shoes, phones and panties were discovered.

The state Commissioner of Police, Mr. Fatai Owoseni, had also been hearing about the serial thief, preying on ladies, he, however, never bargained it would be one of his men.

Owoseni was so angry with the sergeant that he ordered his arrest. Oluseyi faced orderly room trial and was dismissed.