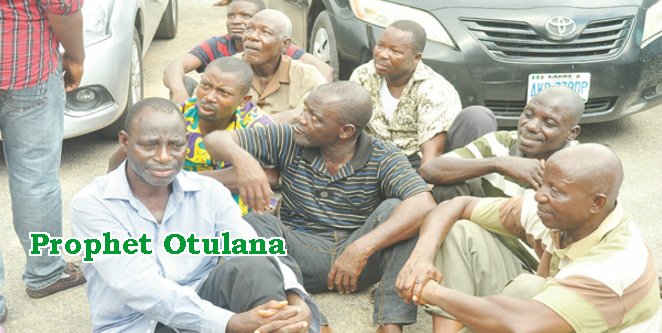 SARS operatives have arrested a 48-year-old Prophet Yemi Otulana for car snatching. Otulana and a car hire operator, Mr. Femi Akintoye, 39, were arrested and accused by police of snatching several vehicles at different locations in the metropolis.

The men had however vehemently denied the allegation. According to the police, Akintoye used to act as an agent to the car snatchers by selling stolen cars at a park in Lekki. Police said Akintoye was arrested, alongside others after he advertised one Nissan Almeri for sale.

Recalling how he was arrested, Akintoye said: “A friend of mine called me that there was trouble. I had earlier displayed a car for sale at his park. He said that policemen came and raided everyone in his park, carting away cars he uses for business.

He told me that the policemen arrested everyone in his park, include eight of his friends. He said police came to raid the park because of the Nissan Almeri car, I displayed for sale on behalf of my friend, Prophet Otulana.”

According to Akintoye, he immediately called Prophet Otulana, explaining the situation. Akintoye suggested they should head straight to the police station, to explain how Otulana came to be in possession of the car.

Akintoye said that on getting to the station, he and Otulana were arrested and detained. Akintoye, who insisted that they committed no crime and were not car snatchers, said his only offence was in trying to assist his friend, Prophet Otulana, to get a buyer for the Nissan car. He explained that Otulana called him three weeks ago, explaining that a female church member was in need of money and wanted to sell her Nissan car for N2.5 million.

Akintoye said: “Because Otulana was a prophet, I only asked him if he knew the owner of the car very well. He told me that he knew the lady. He said the woman was a Barrister. He told me to assist the lady because she needed money.

He said the lady had not received any client for three months.” Akintoye continued: “It was at that point I accepted to help. I agreed that the car should be moved to my park because I thought I had already confirmed everything. I ordered that when they bring the car, they should place a tag indicating that the car was for sale.”

Narrating his own side of the story, Otulana said: “In February, two people came to me for prayers; one Mr Oluwole and his wife, Barrister Olawale.

After I prayed for them, I maintained contact with them. About a month ago, the wife came to tell me that they wanted to sell their car. I promised to help them because she said her family was in a terrible financial situation.

“Since I knew her to be a lawyer, I believed she was proficient in law and that whatever she does, would be according to the law. I linked her with my friend, Akintoye, who could help her sell the car. But since our arrest, we’ve not seen her.

We have been to her house and she was not there. On several occasions, the police called her ,but her phone was always either unreachable or switched off.”