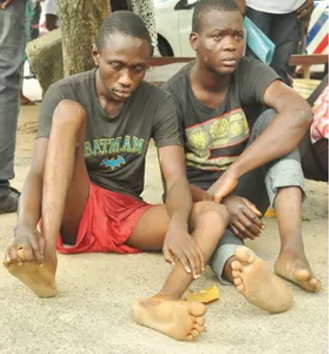 Lagos State Police Detectives have arrested 2 men caught with locally made gun while planning to carry out their first robbery operation.

The suspects 29-year-old Toheeb Anifowose,a motorcyclist and 26-year-old Michael Oguava, a shoemaker were cooling off at a local joint on the 17th of May 2016 when 3 friends came to spot them and discuss a robbery operation with them.

They agreed to go on the operation before they were later arrested following a tip off from some men at the joint.

“Please forgive us, we’ll never steal again. The Federal Government should pardon us!. “If the government will be merciful enough to overlook our crimes, we promise never to indulge in crime again.” – Michael & Toheeb tell police