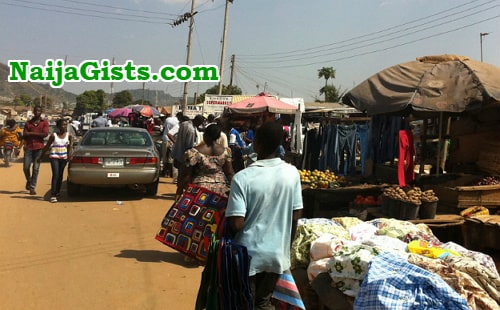 On suspicion they were kidnappers, the youths proceeded to lock all the gates leading to the market to prevent the armed policemen from leaving the market.

The traders claimed the armed men, dressed in police uniforms and carrying AK47 rifles, looked suspicious especially as they tried to ‘kidnap’ a trader without any cogent reason.

The incident occurred few days after a kidnappers den was raided by the Police in Bosso area of Niger state.

The five armed men were said to have stormed the market at about 9.00am where they went straight to the shop of a prominent trader in the market and tried whisking him to the vehicle which bought them.

This attempt to ‘kidnap’ another trader made other traders to raise alarm, which attracted the market youths who mobilised to stop the ‘kidnap’ despite attempts by the armed men to stop them by shooting into the air.

While the police was in the market, some other youths descended on the vehicle which bought the armed men came in, breaking its windscreen and deflating the tyres to prevent any attempt to escape.

The armed men were then taken out of the market to avoid further provocations from the youths.

The Police Public Relations Officer (PPRO), DSP Muhammad Abubakar, when contacted, confirmed the story saying the armed men had reported to police headquarters where they were confirmed to be policemen from Lagos state on special assignment.