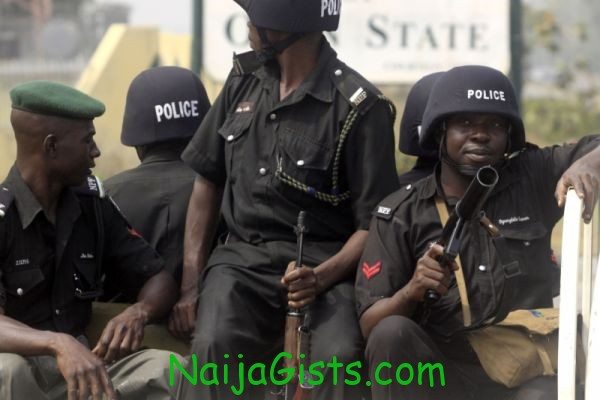 A recent investigation into the foiled attempt by a suspected suicide bomber to blow up a Methodist Church, Tuesday, in Ikorodu area of Lagos, indicated, yesterday, that the suspect could be mentally deranged. naijagists.com

The 26-year-old suspect, who gave his name as Olasunkanmi Ismail,was reportedly caught with a suspected combustive substance which he intended planting in the church’s premises.

During interrogation by a mob, Olasunkanmi reportedly disclosed that he was sent by an unidentified person to plant the substance— a bottle on which was scribbled ‘press in case of emergency’— in the church.

Although policemen from the Bomb Disposal Unit said no explosive was found during a thorough search conducted round the premises, they described the development as a mere bomb scare.

But the suspect, according to detectives at the State Criminal Investigation Department, Yaba, where the case was transferred to, had not been forth coming with useful information about his alleged sinister motive at the church.

Rather, detectives told Vanguardthat his statement had not been coherent, thereby believing that he could be mentally unstable.

To ascertain his true condition, the Lagos State Police Command spokesman, Mr Joseph Jaiyeoba, said plans had been concluded to take Olasunkanmi to a psychiatric hospital where checks would be conducted on him.

Corroborating the detectives’ claim, Jaiyeoba in a statement said: “The suspect is believed to be a person of unsound mind due to his behaviour and uncoordinated utterances. Thus, the suspect is being refereed to Psychiatric Hospital, Yaba, Lagos, for medical attention.

The outcome of the medical check-up, as gathered, would determine the command’s next phase of investigation.

Unconfirmed report said his family members attested to his mental imbalance claim. Contacted on the phone to determine whether the family members disclosed if Olasunkanmi strayed from their watch and also when signs of his mental instability began to manifest, Jaiyeoba replied via text message that the Investigating Police Officer had gone to look for the suspect’s family in Ikorodu.

But residents of Ita-Elewa area of Ikorodu who witnessed the suspect’s arrest and purported confession, said he was merely using the trick to deceive members of the public.

One of them who identified himself as Mr Chukwu Emeka , said: “He did not portray any picture of an insane man. In fact, when we asked what his intention was, he said he was asked to plant the substance there by someone. And when we asked who the person was, he said he would not mention his name, that the person was a prominent person in the country. We were all scared when we saw the inscription ‘press in case of emergency’ because we thought he would blow all of us up. So for any one to suspect he is insane is all a move to deceive us.”

The Command spokesman also clarified that the suspect was not found with any bomb, saying: “When members of the Anti-Bomb Squad led by Assistant Superintendent of Police Umoren E. J. combed the scene and the adjourning areas, no substance of threat was discovered.”

He therefore, advised Lagosians to go about their lawful businesses without any fear, assuring that the command was at red alert to curtail any act of crime and criminality in the state.