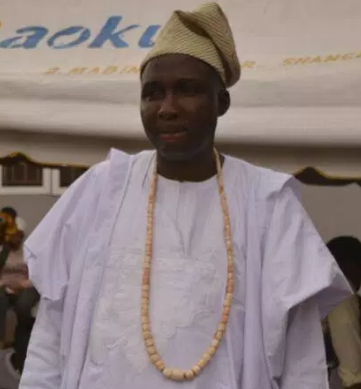 July 20, 2017 – Baale Of Shangisha Remanded In Kirikiri Prison For Faking His Own Kidnap

The Baale will remain in prison alongside his wife, Abolanle and one Mohammed Opeyemi Babatunde, pending when they perfect their bail conditions.

Ogundare and others were arraigned before Magistrate T. Akanni on a three- count charge of breach of public peace and fake kidnapping.

However, the defendants pleaded not guilty to the charges preferred against them.

Counsel to the defendants, Mr. Glory Odimayo, filed a bail application for his clients.

Odimayo argued that the defendants are prominent members of the Shangisha community and would not jump bail.

“The third defendant, before this incident, was the reigning Baale while the second defendant is his wife and as such would not jump bail,” he said.

He assured the court that they would not use their position to tamper with evidence already before the court.

The prosecutor, Mr. Peter Okerinmodun, opposed the application, saying the defendants are popular members of the community and would use such relationship to tamper with evidence.

Okerinmodun told the court if granted bail, their presence in the community would cause breakdown of law and order.

He added that the accused would use their position to influence witnesses.

Magistrate Akanni granted the defendants bail in the sum of N2 million each and two sureties in like sum.

She said the sureties must include a traditional ruler, person with registered property in Lagos and a grade level 17 officer in the state public service.

She adjourned the matter till August 28 for hearing. [NAN]