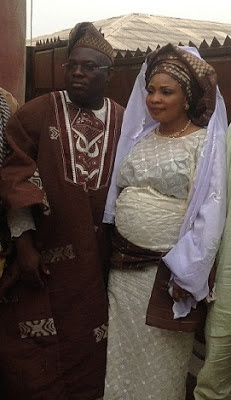 When Yoruba actress Laide Bakare initially told her fans through her publicist few weeks ago that she is going to get married, little did we know she is about to deliver a child.

The actress who dumped her US-based hubby for a wealthy Lagos-based businessman, Mr Tunde Oriowo popularly known as ATM is speaking up in response to a threat from her Nigerian-American ex-husband, Mr Olumide Okunfulure.

Laide just sent the email below through her publicist few hours ago.

The actress said she is 100% sure of the father of her baby and the man in question is Tunde Oriowo.

She also shared some photos of her Nikkai/Wedding ceremony that took place in Lagos weeks before her baby delivery.

Her publicist further said Tunde Oriowo catered to all her needs throughout her conception to delivery.

Read the message below;

This is just to disabuse the minds of skeptics, as a first step. Nollywood actress, Laide Bakare, was duly married to businessman, Mr. Tunde Oriowo a.k.a. ATM. These are pictures from the Nikkah ceremony that was held quietly in Lagos. Also, as the pictures speak, Laide Bakare was carrying Mr. Oriowo’s baby at the time.

For the nine months that she was pregnant, during which the Muslim wedding was held, Laide was under the watch and care of no other man but Mr. Oriowo who played well his roles as husband and father.

See another photo from Laide Bakare’s Nikkai wedding ceremony below; 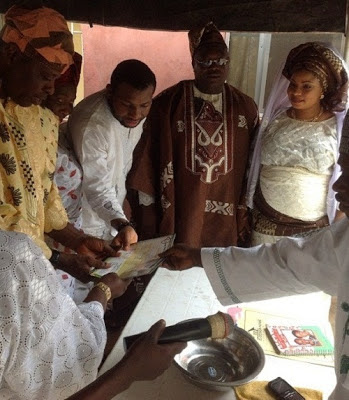 Hmmmmm. what a smart actress, she dumped a poor hubby for an ATM machine.