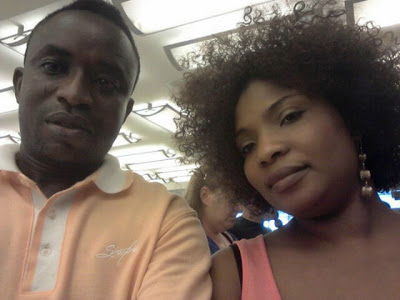 June 5th, 2013 – Laide Bakare’s Ex-Husband Claims He’s The Father Of Her Newborn Baby “The Boy Is Mine..I’ve Got Proofs”

Laide Bakare’s family life is getting messier daily. The actress allegedly dumped her first husband, A US-based man, Olumide Okunfulire who sponsored her to America few months ago.

After securing her green card, she left him for a Lagos-based businessman named Tunde Oriowo.

Laide Bakare’s estranged hubby is speaking up with vengeance on this newborn.

The Ondo-born business man claims he is the biological father of Laide Bakare’s new born baby boy since he was still legally married to her in the last 9 months before she left the marriage.

Hear Olumide in his own words below;

I heard that my wife delivered a baby boy barely two months after she made a release that we were divorced, and she’s saying that the baby belongs to one Mr. Tunde Oriowo. That’s a lie, wicked lie. I’m the biological father. I have pictures to show that we were always together, but she deliberately kept the pregnancy out of my knowledge.
In other words, it might be the result of her extra-marital affair without my knowledge, because there were cases that she would leave me and our daughter in the US, come to Nigeria all in the name of promoting her movies but staying with married men in Lagos. I couldn’t monitor her because I was not always in Nigeria.”

I don’t want to put laws into my hands. So, I have already notified my lawyers in the US and already contacted my lawyers in Nigeria about the matter, because she has many questions to answer. If she wants to proof herself right, I challenge her to go for DNA test because that would unveil the true father of the baby.
She’s still my wife. We’re legally married. She came to the States to deliver using my surname and my green card. It’s just unfortunate she’s using all the things I did for her to favour another man. So, our marriage is intact, legally. And if she wants to quit, legal action must be taken.”

If this is true, then Laide Bakare must be really careful with her actions.

In Yorubaland, they say aki gbe omo oba fun osun (You can’t give another man’s child to someone else). This is not done.

A DNA test will surely sort out this paternity mess.