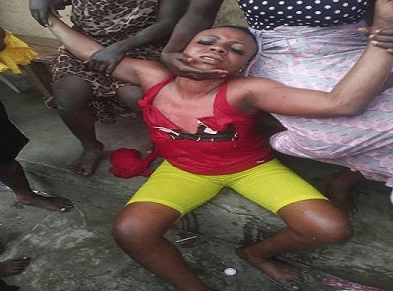 Exclusive report by By Tajudeen Adebanjo, The Nation

The landlord, identified as Saka, also allegedly beat up the celebrator’s mother to coma.

On seeing Taiwo in coma, neighbours swarmed round Azeez’s mother to revive her.

After she was revived, she was taken to her room.

Saka was said to be one of the landlords in the building, having inherited it from their parents.

He was said to have expressed anger, alleging that he did not want a ceremony that would attract people that would smoke and drink alcohol on the premises.

The party, he said, could lead to a commotion.

Eyewitnesses said Saka was assured by the celebrator’s mother that nothing of such would happen, as the party was meant for children.

The explanation, it was said, fell on Saka’s deaf ears.

He allegedly prevented the party from starting by throwing away the cake made for the ‘birthday boy’. He also broke the drinks.

Confronted by Azeez’s mother, Taiwo, Saka allegedly picked a stick and hit the woman on the head.

She immediately fell down and went into coma.

Neighbours’ children, who came in colourful branded shirts tagged: “Nobody rocks January 5 as AZEEZ”, watched helplessly as other residents battled to revive the celebrator’s mother.

The kids, looking dejected, appeared to have lost hope of having a nice time.

An eyewitness told The Nation that the house was in commotion.

“This New Year, we should just pray that bad things should not happen when celebrating good things.

“The party was about starting when the landlord came and threw the cake away. He also broke the wine used to decorate the cake.

“The celebrator’s mother, Taye, came out to express her pain, but the landlord picked a stick and hit her on the head. Then she fainted. People are praying for her to be revived. I pray we all will not experience things like this in our life.”

The Nation learnt that the police were invited to investigate the incident, but Saka had fled before they could reach the crime scene.