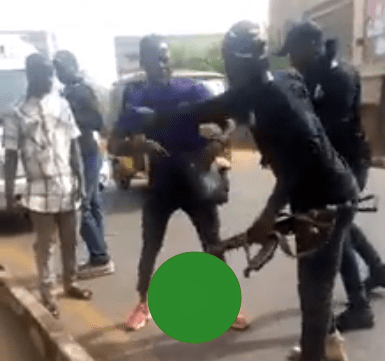 After the directive of the Inspector General of Police (IGP), Mohammed Adamu, three policemen who were caught on video assaulting a young man in Enugu State have been arrested.

In the video, which was shared by a Twitter handle @onyezeme on Saturday, the young man identified as Justice Obasi was seen being manhandled by three armed police officers.

According to @onyezeme, the young man was being manhandled for refusing to unlock his phone.

“They labelled the boy a fraudster (yahoo boy) without any evidence,” the handle read.

This sparked outrage and the police reacted on Sunday morning, saying the IGP had ordered investigation into uncovering the identities of the policemen.

Speaking through the verified Twitter handle of the Nigeria Police Force @policeNG, they promised to bring the erring policemen to book as the IGP condemned all forms of brutality and abuse of human rights.

“The Force PRO is already personally in touch with the victim. The public are implored to be calm as the Force remains committed to protecting and upholding the rights of all Nigerians,” the police Twitter handle read.