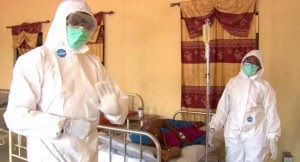 Lassa fever virus has claimed another victim in Lagos, making it two people who have died of the disease while 534 people who have contacts with Lassa Fever patients have been placed under surveillance.

LASG says the number of people who have tested positive to he disease are now four, out of which two have died, while the results of three more suspects were being awaited.

At a news conference on Wednesday, Commissioner for Health, Dr. Jide Idris said it was doing everything possible to defeat the deadly Lassa fever like it did during the outbreak of Ebola virus, just as it urged residents of the state to be on red alert by embracing personal and environmental hygiene.

He advised residents to block all holes in their homes through which rats could gain entrance, and also refrain from eating rat meat as well as any food already contaminated with urine, saliva and faeces of infected rat.

Idris said so far, the state has recorded 20 suspected cases, out of which 14 tested negative, while 4 cases were confirmed positive.

He said three results were still being awaited, while 537 contacts have so far been listed, out of which 534 were currently being monitored.

The commissioner said that the last confirmed case was a 27-year-old lady who travelled to Edo state on December 24, 2015 and returned to Lagos on January 2, 2016.

He said the lady, who reportedly travelled for burial of her relative, became ill on January 14, 2016 and received care in one private hospital and three churches before she was referred on January 23, 2016 to Ijede General Hospital with fever, vomiting, diarrhea and body weakness.

Idris said that the patient eventually died within few hours of admission, while the case was confirmed as Lassa fever on January 26, 2016.

The remains of the diseased, according to Idris, has been kept in the morgue in leak proof body bag, while she would be buried after due consultation with her family.
Out of that case alone, the Commissioner said 90 persons had so far been listed as contacts as at January 26, 2016, while contact tracing is currently on-going.

“Members of the public are being sensitized to note that Lassa fever can be contacted through: ingestion of foods and drinks contaminated by the saliva, urine and faeces of infected rats; catching and preparing infected rats as food; inhaling tiny particles in the air contaminated with infected rat urine or droppings, and direct contact with a sick person’s blood or body fluids, through mucous membranes like eyes, nose or mouth,” he said.

While assuring that Lagos State under the leadership of Mr. Akinwunmi Ambode would continue to provide quality, affordable and accessible healthcare to the people towards achieving universal healthcare to all, the Commissioner assured that the government would overcome Lassa fever just as it defeated Ebola virus disease.

He urged residents to maintain basic environmental sanitation, including proper disposal of refuse and avoiding open defecation. He further asked the residents to embrace regular hand washing with soap and water, and maintain high level of personal hygiene as well as adequate nutrition.